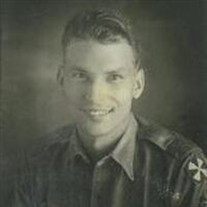 Alden Douglass Palmer, 84, of Thetford Center, Vermont passed peacefully at his home surrounded by his family on Saturday April 6, 2013 . Alden was born June 6, 1928, son of Charles and Eileen (Blodgett) Palmer. He attended schools in Thetford. Alden was a Sargent in the Army. He saw action in Korea and was in Seoul when it fell during the war. He is survived by his loving wife of 61 years, Geraldine (Gerri) Hoffman Palmer. They met rolling-skating at the Pine Grove Rink in Indian Town Gap, Pennsylvania, when Alden was in the Army. Alden is survived by: a son George and his wife Susan; a daughter Jennifer (Palmer) Poutre' and her husband Norman; grandchildren, George Jr, Kristen, Mandy Jo (Palmer) Comacho and her husband Jason, stepson Benjamin Smith and his wife Karli, Jacqueline Poutre', Merlin Poutre' and his wife Catherine. He is also survived by eight great-grandchildren Benjamin II, Destiny, Gannon, Joshua, Kaitlynn, Kirsten, and Mckinley. He is pre-deceased by a step grandson Jason Smith. Alden leaves his siblings, Alice Beauchene, Suzanne Herrit, Josephine Palmer, along with lots of nieces and nephews. Alden was pre-deceased by his brothers; Carroll Palmer, Charles Palmer Jr., Alex Palmer and his sister Joyce (Palmer) Manning. Alden worked in the mines and in the payroll department for the Elizabeth Copper Mines in Strafford, VT. He worked in the woods and trucked logs. He worked at the Union Village Dam, Interstate Tire, Manchester Gulf Station, as a mail carrier, and his favorite job was as a school bus driver for the town of Thetford for many years. His hobbies were bee keeping, collecting old bottles, raising pigs and rabbits, playing cards, gardening, and reading. He enjoyed being with family and surrounding himself with children. Alden enjoyed teasing anyone that would let him pick on them. There will be a Memorial Service and Celebration of Alden's life on April 20, 2013. The service will be held at the United Church of Thetford in Thetford Center on Route 113 at 12:30, followed by a graveside service at the Evergreen Cemetery. The gathering will be held at the Thetford Center Community Center (across the road from the church). Anyone wishing to speak or contribute a memory is welcome to do so. Donations in his memory may be made to the Visiting Nurse Association and Hospice of Vermont and New Hampshire, 66 Benning Street, Lebanon, NH 03766. The Hale Funeral Home of Thetford Center, VT is in charge of arrangements. To view an online guest book go to www.halefuneralhomes.com. To plant Memorial Trees in memory of Alden Douglass Palmer, please click here to visit our Sympathy Store.

The family of Alden Douglass Palmer created this Life Tributes page to make it easy to share your memories.

Send flowers to the Palmer family.