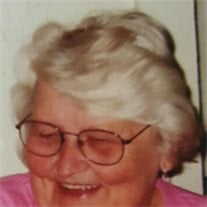 Corinth, VT- Alice Mae "Bobbi" Knapp, 86 of Pike Hill passed away at Dartmouth Hitchcock Medical Center, Lebanon NH on Sunday, October 30, 2016.Alice was born on September 16, 1930, in Corinth, VT, the daughter of Arthur Ray and Ethel Dorothea (Lovett) Comstock. She was educated in the Eaton District School in Corinth and Thetford Academy in Thetford, VT.After graduating high school Mrs. Knapp worked as a home health aide in Washington, VT, at the Barre Capacitor Plant in Barre, and Bowen-Hunter Bobbin Mill in East Corinth.On December 4, 1953, she married Don Abner Knapp in West Topsham, VT. They made their home on Pike Hill in Corinth, until the death of Mr. Knapp in 1994. She and her husband operated a dairy farm and Mrs. Knapp worked as a substitute rural mail carrier in Corinth and Vershire.Since 1988 Mrs. Knapp served as a volunteer driver for Stagecoach Transportation. She was also active in the real estate rental business.Alice struggled with Alzheimer's disease and was able to remain at her home with help from her grandson Luke Knapp, her niece Diana Perry and Dottie Perkins until this past January where she was moved to the Blue Spruce Home for the retired in Bradford, VT.Survivors include one daughter Verla "Jigger" Donnelly and her husband Butch of Corinth, VT, a sister Robena Roberts of Littleton, NH, as well as three grandchildren and one great-grandson and numerous nieces and nephews.She was predeceased by her husband Don Knapp, son Eric Knapp, three brothers; Ralph, Clifford, and Kenneth Comstock, three sisters; Hazel Flye, Bernice Rood, and Patricia Ricker, nephews; Russell Comstock and nieces, Joann Comstock and Regina Smith.A graveside funeral service will be held on Saturday, November 5th at 1 P.M. at the East Corinth New Cemetery. All are welcome to attend.The Hale Funeral Homes and Cremation Care of Bradford, VT are in charge of arrangements. To view an online guestbook go to www.halefuneralhomes.com. To plant Memorial Trees in memory of Alice Mae Knapp, please click here to visit our Sympathy Store.

The family of Alice Mae Knapp created this Life Tributes page to make it easy to share your memories.

Send flowers to the Knapp family.