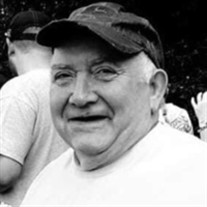 ALL SERVICES FOR GENE ARE POSTPONED UNTIL SPRING DUE TO COVID THE FAMILY WISHES TO THANK EVERYONE FOR THEIR UNDERSTANDING IN THIS REGARD ANED LOOKS FORWARD TO A TIME OF SHARING IN THE SPRING.   Gene Allen Welch Sr, 79, of Groton, VT passed away peacefully at his home Tuesday, February 1, 2022. He was born in Newbury, VT on November 5, 1942 the son of George J and Violet (Minshull) Welch. Gene grew up on his family dairy farm on Jefferson Hill. Gene was a dairy farmer his entire life except for three years when he drove milk truck for Beckley Transportation. Gene attended Newbury Elementary and High School. Gene married Donna Carbee in 1959 and had six boys. He married Darlene White on May 27, 1978 and they had four children. Over the years Gene was a dairy farmer in various places retiring from the Newmont farm in 2005. Gene was a proud dairy farmer he also enjoyed hunting, going to Maine, spending time with his family, riding his four wheeler and watching basketball. He was pre-deceased by his wife Darlene Welch, two sisters Catherine Haskell and Shirley Maxwell, three brothers Carlos Welch George Welch and Roy Welch Sr, and his great granddaughter Grace Welch. He is survived by Gene Jr and wife Cathy of Corinth, Donald of West Topsham, Floyd and wife Lisa of Topsham, Robert and wife Heather  of Topsham, David and wife Stacy of Danville, Jeffrey and wife Donna of Topsham, Brooke and husband John of Topsham, Gene Edgar of Corinth, George of South Royalton, Justin and wife Amanda of Topsham. Grandchildren; Gene III, Rebecca, Christina, Daylan, Stephen, Floyd, Josh, Felicia, Regina, Jessie, Kim, Robert Jr, Justina, Jenna, Dakota, Jeffery, Waylon, Wyatt, Shirley, Michael, Taylor, George Jr, Owen and Elizabeth. 26 Great Grandchildren including Gene Welch IV who grew up with his Pa and continued to spend a lot of his time there. Many nieces, nephews and cousins. Calling hours will be held at Hale Funeral Home in Bradford VT, Friday, February 4, 2022 from 6-8 pm. A funeral service will be held Saturday February 5, 2022 at 11 am at the East Topsham Presbyterian church. Private burial will be held in the spring in the East Topsham Cemetery   To plant Memorial Trees in memory of Gene Allen Welch Sr., please click here to visit our Sympathy Store.

ALL SERVICES FOR GENE ARE POSTPONED UNTIL SPRING DUE TO COVID THE FAMILY WISHES TO THANK EVERYONE FOR THEIR UNDERSTANDING IN THIS REGARD ANED LOOKS FORWARD TO A TIME OF SHARING IN THE SPRING.   Gene Allen Welch Sr, 79, of Groton, VT passed away... View Obituary & Service Information

The family of Gene Allen Welch Sr. created this Life Tributes page to make it easy to share your memories.

ALL SERVICES FOR GENE ARE POSTPONED UNTIL SPRING DUE TO COVID
THE...

Send flowers to the Sr. family.