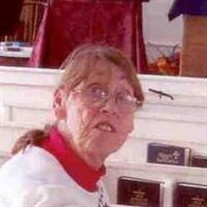 Bradford, VT- Anita L. Bean 72 of Bradford died peacefully Saturday, March 14, 2015 at her home with her family by her side after a short but tough battle with cancer. Anita was born on July 29, 1942 in Richford, VT the daughter of Alphonse and Edna Martin. She graduated from Bradford Academy Class of 1961. She worked for a lot of local business's and retired from Britton Lumber Company in Ely, VT in 2005. Anita was a member of the Corinth Bible Church, and the Bradford Fast Squad for many years. She enjoyed her love of skiing and for many years volunteered teaching children, her love of camping specially going to Fryeburg Fair in Maine, car shows to show her old car, her beloved beagles Candy and Sally, skating, her favorite TV show Jeopardy and doing her word search, and also going to the Orange East Senior Center at noon for lunch, and spending time with her family and friends. Anita is survived by her husband of fifty three years, Carroll D. Bean of Bradford, VT; four children, Marnita and husband Duane Leach of Fairfax, VT., Keith Bean and wife Angella of Bend, Oregon, Rodney Bean and wife Susan of Bradford, VT and Seth Bean and wife Jessica of Bradford, VT.; eleven grandchildren, Steven, Nick, Andrew, Kristina, Ethan, Sueann and husband Spencer, Isaiah, Connor, HaleLeigh, Wyatt and Avery; four siblings, Sandra, Richard, David and Mike and their spouses; many nieces and nephews. A celebration of her life will be held at a later date in June. There are no calling hours. In lieu of flowers donations in Anita's memory may be made to the Northeast Slopes, PO Box 1101, East Corinth, VT 050349 or to the Orange East Senior Center, 176 Waits River Road, Bradford, VT 05033 or to the Corinth Bible Church, PO Box 525, Corinth, VT 05039. The Hale Funeral Home and Cremation Care of Bradford, VT are in charge of arrangements. To view an online guestbook go to www.halefuneralhomes.com To plant Memorial Trees in memory of Anita L. Bean, please click here to visit our Sympathy Store.

Bradford, VT- Anita L. Bean 72 of Bradford died peacefully Saturday, March 14, 2015 at her home with her family by her side after a short but tough battle with cancer. Anita was born on July 29, 1942 in Richford, VT the daughter of Alphonse... View Obituary & Service Information

The family of Anita L. Bean created this Life Tributes page to make it easy to share your memories.

Send flowers to the Bean family.