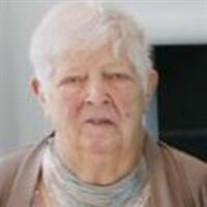 Ann Hughes, 93, passed away at her home on February 9, 2020. She was born Mary Ann Egan on September 12, 1926, in Trenton, NJ, and later married her high school sweetheart, John David Hughes, on August 27, 1949. They spent the early years of their marriage in the New York City metro area, before settling in Princeton, NJ. She was for many years a travel agent, though she was quite upfront that she preferred to only book trips to two locations: London and Bermuda.She was a devoted wife, always open to whatever life-changing adventures her husband proposed. They spent several years in Camden, Maine and St. Michael's, on the Eastern Shore of Maryland. After her husband retired, they moved to New Bern, NC. Together they renovated many homes, each of which sold the day it was put on the market.After her husband of 38 years passed, she moved to Orford, NH, and occupied what she referred to as "Small Barn," an in-law cottage next to her daughter and family. She quickly became an active member of the community, making new friends and volunteering at the Orford Social Library (OSL.) She was treasurer of the Friends of OSL, and, together with her good friends, for many years ran the OSC booth at the annual Orford Flea Market.She was also a devoted mother and grandmother, always a kind, calm, and cheerful presence in their lives. She was on-site during the "older boys" growing-up years, always providing whatever support was needed, including countless driving hours while the boys took Drivers Education. As well, she traveled all over New England to attend their various sporting events. As they grew and she aged, the roles evolved. She so enjoyed having them help her, just as she had enjoyed helping them years earlier.She became a master of finding some esoteric book or other hard-to-find item in the far corners of the internet, especially for her son. Until recently, she drove herself from New Hampshire to Maryland several times a year to spend time with his family. Trips to the beach with the "little kids" was the annual highlight of her year.For the past nine years, she also joined her daughter volunteering at the Gift Shop at Dartmouth-Hitchcock. She enjoyed helping out wherever needed at the Shop, but did the majority of her work in the Baby Department. Just several days before her death, she spent the morning pricing toys, purchasing several for the upcoming birthday of her favorite granddaughter.She was pre-deceased by her parents, two brothers, two cherished sisters-in-law, and her husband. She is survived by her daughter and son-in-law, Meredith and Terry Harwood, of Orford, NH, son and daughter-in-law, John and Susannah Hughes, of Silver Spring, MD, grandson and granddaughter-in-law, Gus and Lindsay Harwood of New York, NY, grandson Hugh Harwood, of White River Junction and granddaughter-in-law-to-be Tess Johnson of Quechee, VT, grandsons Bo Harwood of Baltimore, MD, Sam Hughes of Silver Spring, MD, granddaughter Gwen Hughes also of Silver Spring, MD, and brother and sister-in-law, Ed and Karen Egan of Wilmington, NC.A memorial service will be held in Princeton, NJ in May. She may be remembered by making a contribution to Cardiology Research at Dartmouth-Hitchcock Medical Center: Dartmouth-Hitchcock.org/donate. To plant Memorial Trees in memory of Ann (Egan) Hughes, please click here to visit our Sympathy Store.

Ann Hughes, 93, passed away at her home on February 9, 2020. She was born Mary Ann Egan on September 12, 1926, in Trenton, NJ, and later married her high school sweetheart, John David Hughes, on August 27, 1949. They spent the early years of... View Obituary & Service Information

The family of Ann (Egan) Hughes created this Life Tributes page to make it easy to share your memories.

Send flowers to the Hughes family.