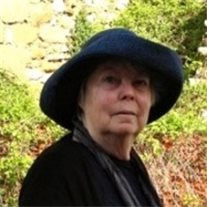 Newbury, VT- Ann (Anna Harris) McGarrell, (b. September 18, 1933), poet and translator died on January 10, 2015 in Woodsville, NH.Beloved wife of the painter, James McGarrell and mother of Andrew Rider McGarrell, of St Joseph MO and Flo (Flora Raven) McGarrell, who perished in the Haitian earthquake of 2010. She was also predeceased in death by siblings Enrique Harris and Carmelia Harris.Ann grew up in Southern California where she graduated from Occidental College in 1953 and joined her mother in employment by the motion picture industry as a story editor.From 1956 until 1993 when they moved to their present home in Newbury VT following James term as Artist in Residence at Dartmouth College, James and Ann resided and worked in Portland Oregon, Bloomington Indiana, Umbertide Italy in the province of Umbria, where she still owns a tower house, Paris and Grimaud France, and St Louis Missouri.ANN MCGARRELL was a poet and translator who described herself as "internationally unknown."Ann was the author of Flora: Poems in a gorgeous limited edition published by Perishable Press in 1990. In 2012 Cove House Press, New York, issued her Gwen and Other Poems, a collection based on the life of the Welsh painter Gwen John. In 1997 she won the PEN/Renato Poggioli Prize for her translation of Vittoria Ronchey's Il Volto di Iside (The Face of Isis). In 2011 From Luminous Shade, her translation of Giuseppe Ungaretti's Il dolore, was published by Vermont's Harbor Mountain Press (2011). Among her other translations are Alberto Bevilacqua's Eros (1996), Lucio Giuliodori s Musica dentro: The Inner Music (2015), an unpublished collection of poems by Jeffery Beam into Italian, and a revised translation of Alberto Moravia's Two Women (2001). Ann also co-authored The Roswell Artist-in-Residence Program: An Anecdotal History with Sally Anderson. She has been awarded fellowships and residencies at France's Fondation La Napoule; the Bogliasco Foundation (Centro Studi Ligure); Sanskriti Kendra in New Delhi; the Josef and Anni Albers Foundation in Connecticut, and the Virginia Center for the Creative Arts.Ann had been currently translating a collection of the painter Balthus' love letters to his first wife, Annette de Watteville. Her poems and translations appeared in little magazines in this country and Great Britain from the 1960s to the present.A celebration of Anna's Life will be held later in the spring. There are no calling hours.In lieu of flowers a modest donation to the Frame Family Foundation which does community art programs in Haiti would be appreciated at the Frame Family Foundation, 36529 S.Desert Sun Drive, Tucson AZ 85739. Jakmel Ekspresyon, where the Frame Family Foundation administers the funds, has a site for giving at www.jecenter.org.The Hale Funeral Home and Cremation Care of Bradford, VT are in charge of arrangements.To view an online guestbook go to www.halefuneralhomes.com To plant Memorial Trees in memory of Anna Harris McGarrell, please click here to visit our Sympathy Store.

The family of Anna Harris McGarrell created this Life Tributes page to make it easy to share your memories.

Send flowers to the McGarrell family.