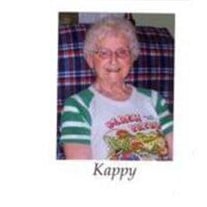 Bradford, VT- Anna Katherine "Kappy" White, 93, formerly of Mallary farm in Bradford, VT died at the Oasis Home in Bradford on Saturday, June 8, 2013 Kappy was born on November 4, 1919 in Granby, MA the daughter of Stafford and Anna Barton (Rust) Bayley. She was the only child of the family not born in Vermont, and was the only one who cared. She graduated from Peacham Academy in Peacham, VT 1n 1937. Her high school basketball record for most points scored in a game remained unbroken for many years. On September 18, 1939 she married Leon Frank White. In 1943 they moved to Mallary Farm in Bradford, VT where they enjoyed 62 years of marriage, until his death in March of 2001. Kappy was an active member for over 50 years of the Grace United Methodist Church in Bradford. She was Sunday School Superintendent, and also taught Sunday School. She sang in the Choir, was Treasurer of the Woman's Fellowship for many years. Her love for singing took her to Europe three times, performing with the North Country Chorus. She enjoyed the outdoors, even hiking with a group from Bradford on many outings, gardening with Leon, and feeding the wild birds. She was an excellent cook and seamstress. Her thanksgiving dinners were family favorites, as was the annual family gathering for sugar-on-snow and her scrumptious raised doughnuts. She is survived by her two daughters, Francena Goodine and husband Carroll of Peru, Maine and Jane Demers of Addison, VT; five grandchildren, Julie Farmer, Joelle Parsons, Jonathan Goodine, Joseph Demers and Ellen Trono; four great-grandchildren, Gianna and Dylan Trono, Curtis Farmer and Jacob Demers; and one brother, Luther "Bill" Bayley. She was predeceased by her husband Leon F. White and sisters, Eleanor Bayley, Alma "Frank" Randall and Eloise Miller. Graveside funeral services will be held on Saturday, June 22, 2013 at 1 pm in the family lot in the Fairlee Village Cemetery Fairlee, VT. There are no calling hours. In lieu of flowers donations in her memory may be made to the Grace United Church, Main St., Bradford, VT 05033, or to the Oasis Home, 92 Cottage St, Bradford, VT 05033. The Hale Funeral Home of Bradford, VT is in charge of arrangements. To view an online guestbook go to www.halefuneralhomes.com To plant Memorial Trees in memory of Anna Katherine White, please click here to visit our Sympathy Store.

The family of Anna Katherine White created this Life Tributes page to make it easy to share your memories.

Send flowers to the White family.