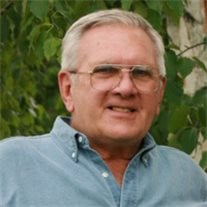 Orford, NHAnthony Wayne "Tony" Perry of Boat Landing Road passed away Sunday, December 10, 2017 at Dartmouth-Hitchcock Medical Center in Lebanon, NH following long battle with cancer. He was 74.Born on August 2, 1943 in Woodsville, NH, he was the son of Leighton A. and Lucille Mary (Gilbert) Perry.On June 16, 1963, he was married to his high school sweetheart Carol Ann Chesley of Lyme, NH.He was a 1961 graduate of Orford High School. A man of strong lifelong work ethic, he worked in farming, road construction, and logging prior to founding Tony's AutoBody in 1972. He owned and operated the body shop and towing service for the past 45 years.Tony's past times included golf, skiing, motorcycling, restoring and collecting classic cars, and sugaring. He was a gifted musician and enjoyed playing his Gibson Guitars and singing. He especially enjoyed spending time at his river cottage and boating on the Connecticut River.He will be most remembered as a devoted family man who was devoted to his wife, children, and grandchildren and as a person who was always willing to lend a helping hand to others. He also had a soft spot in his heart for his shop cats.Besides his parents, he is pre-deceased by a brother Tomas "Tom" Perry of Fairlee, VT.He leaves his loving wife of 54 years Carol Ann Perry of Orford, NH; two sons Randy Perry and wife Cara of Orford, NH and Shiloh Perry and wife Sherri of Brownfield, ME; a daughter Nicole Perry of White River Junction, VT; three grandchildren Tyler Perry, Eric Perry, and Jordan Woodward; a brother Todd Perry of Fairlee; a sister Jenny Smith and husband David of New Boston, NH; a sister-in-law Jan Perry of Fairlee, VT; several nieces and nephews.A Celebration of Life will be held from 2:00pm to 5:00pm Sunday, December 17 at Dowd's Country Inn, 9 Main Street, Lyme, NH. There are no calling hours.Memorial donations in Tony's memory may be made to The Friends of Norris Cotton Cancer Center, 1 Medical Center Drive, Lebanon, NH 03756. Arrangements are by Hale Funeral Homes and Cremation Care of Bradford & Thetford, VT. Online guestbook at www.halefuneralhomes.com. To plant Memorial Trees in memory of Anthony "Tony" W. Perry, please click here to visit our Sympathy Store.

The family of Anthony "Tony" W. Perry created this Life Tributes page to make it easy to share your memories.