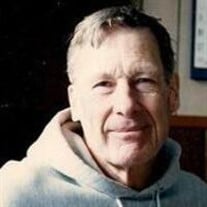 Arthur J. Boynton was born July 23, 1921 in Cleveland, Ohio to Arthur J. Boynton and Ruth Bullock Boynton. He spent his early life in Woodward, Alabama, but grew up in Winnetka, Illinois and graduated from New Trier High School. From 1939 to 1943, he attended Northwestern University, Chicago, Illinois, where he played Big Ten football. He earned a B.S. degree in education. Later, he earned his Masters' degree in psychology from Columbia University. Arthur undertook further studies at the University of Puerto Rico, Middlebury College, The Institute of Critical Languages, and Penn State University where he studied to become a blacksmith. During World War II, starting in August 1943, Arthur served in the U.S. Navy as the Communication Officer and then, Commanding Officer, on the U.S.S. LCI 503 and on the LC 793 in the Pacific. He was awarded a Victory Ribbon, American Theater Ribbon, Philippine Liberation Ribbon, and Asiatic Pacific Ribbon. He remained in the Naval Reserves until 1956. In the 1950's, Arthur taught at the Colegio St. Justo in St. Just, Puerto Rico. Puerto Rico and its people always remained very dear in his memory. In 1959, Arthur moved to Orford, New Hampshire, working at Equity Publishing Company and Thetford Academy before founding the Boynton School, a private, alternative, primarily boarding, secondary school, which he ran from 1964 to 1996. The school was located on Arthur's home farm. The red school house contained a 14,000+ volume library, a large, single classroom, and a dormitory with living space for 25 students. The philosophy of the Boynton School was that learning should be exciting and a full time, life-long endeavor. Arthur provided a climate favorable to students seeking their best selves by encouraging a positive attitude toward self- improvement, life-long study, harmonious relationships, self-discipline, and sustained effort. In addition to attending classes six days a week, each student was expected to help with cleaning and cooking. Furthermore, although optional, many of the students enjoyed and assisted with farm chores and outdoor work, including working with draft horses, cutting and splitting firewood, and sugaring. On March 21, 1987, Arthur married Carol C. Damiani at his home in Orford. From 1988 until June 1993, Carol often taught alongside Arthur. Arthur closed his school in 1996, though he continued to teach for a number of years thereafter, including tutoring in Russian at the Lyme Elementary School and teaching Spanish at Oxbow High School. Arthur was dedicated to life-long learning and continued to study various languages -- he was fluent in 12. He read voraciously. He could converse on any subject and loved to engage everyone he met, including total strangers, in conversation. Arthur was an accomplished athlete. In high school, he played football. In college, he played Big Ten football. In 1993, he played in a Northwestern alumni football game that included a special "Boynton" play. He was a championship heavy weight boxer, training with the famed Angelo Dundee. At the age of 64, Arthur went to compete in the Golden Gloves and made the news around the world, including an entire segment on the Paul Harvey Show. He played basketball and baseball for numerous teams in the Upper Valley. Arthur was also an accomplished musician. He loved to sing and had a rich and beautiful bass voice. He played the classical guitar, piano, recorder, Quattro, and organ. For many years, Arthur was an active member at St. Thomas Episcopal Church in Hanover, New Hampshire, and, more recently, he was a member of St. Martin's Episcopal Church in Fairlee, Vermont. He played the organ for many years at the United Congregational Church of Orford. Arthur enjoyed his farm in Orford where he lived for 55 years. He loved nature and all animals -- both wild and domesticated. He always had a menagerie of animals. He loved working the land with big draft horses and often mowed his smaller fields with a scythe. Arthur was truly a kind soul, courteous and generous to all: a loving and devoted husband, a loyal and caring friend, and a good and helpful neighbor. Many who knew him often referred to him as a Renaissance Man. Arthur was predeceased by his parents, his sisters, Sylvia Reynolds and Margaret Burrows, and his brother, John F. Boynton. He is survived by his wife, Carol, niece Anne Gonzales, niece Susan Ward and her husband, Tom, nephew John Boynton III, and nephew John Burrows and his wife, Nancy. He is also survived by his great niece Amy Burrows Perkins and her husband, Harry, and their children, Lucy and Sam, great niece Sarah Gonzales Gallegos and her husband, Ignacio, and their daughter Ana, great niece Magdalena Gonzales and her children, Deserae and Anthony, great nephew Michael Burrows, and great nephew Jordan Ward and his wife, Brianna, and their children, Alaina and Jackson. He is also survived by his many beloved former students, whom he considered family. Arthur's family would like to express special appreciation for the friendship and caring of Bob Claflin and Marion Jacobus who visited each week talking with Arthur and keeping him company. Memorial contributions may be made to a cause of your choice. A memorial service will be held in the spring. The Hale Funeral Home of Bradford, VT is in charge of arrangements. To view an online guestbook go to www.halefuneralhomes.com To plant Memorial Trees in memory of Arthur Jefferson Boynton Jr, please click here to visit our Sympathy Store.

Arthur J. Boynton was born July 23, 1921 in Cleveland, Ohio to Arthur J. Boynton and Ruth Bullock Boynton. He spent his early life in Woodward, Alabama, but grew up in Winnetka, Illinois and graduated from New Trier High School. From 1939 to... View Obituary & Service Information

The family of Arthur Jefferson Boynton Jr created this Life Tributes page to make it easy to share your memories.

Send flowers to the Boynton family.