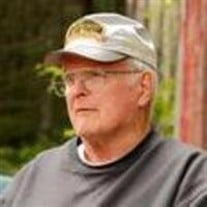 F.North Thetford, VT - Arthur F. Palmer, 78, died on Friday, December 20, 2013 at home on the family farm where he was born, after a period of declining health. He was born on November 17, 1935 in North Thetford. Son of A. Maxwell Palmer and Katherine Delphine O'Neal. He graduated from Thetford Academy in 1952. He worked for CW Gray while in high school. He ran a milk route picking up cans of milk from local farms, and delivering it to the creamery. He worked as a heavy equipment operator building large flood control dams, the construction of I-91, and the Red Sox training facility in Winter Haven, Fl. He drove truck, both local and cross country. In 1969, he settled down to the family farm, which has been in the family for more than 200 years. His retirement from active dairy farming in 1995 lead to starting a sawdust delivery business, which he continued until 2010. He was actively involved in many organizations, including stocking fish for the Upper Valley Fish & Game Club kid's fishing derby. He took great joy in doing this for over thirty years. His hobby of collecting milk bottles led him to host an annual bottle collectors picnic, which was a big event for collectors from far and wide for over twenty years. He held a deep appreciation for the farm and its history. The "Hill" was a special place for him as well. Many of his happiest times were spent on the hill. Hunting or just looking at trees, all held great joy for him. Arthur was predeceased by his first wife, Gloria Avery, son, A. John Palmer, and step- daughter Nancy Rose Godfrey. He is survived by his wife Arlene Palmer, sons, David Palmer, Alan Palmer, Roger Rose, and William Rose, daughters, Bonnie Dore, Kathy Young, Susan Stallings and Laurie Ingalls, unofficial son, Andrew George, 18 grand children, 25 great grand children and 1 great, great grandchild. In lieu of flowers, donations may be made to the Upper Valley Fish & Game Club Conservation Camp Scholarship Fund, PO Box 279, Thetford Center, VT 05075. A graveside service will be held Saturday, May 24, 2014 at 1:00 at the Pleasant Ridge Cemetery, North Thetford, VT. The Hale Funeral Homes of Thetford Center and Bradford, VT are in charge of arrangements. To view an online guestbook go to halefuneralhomes.com. To plant Memorial Trees in memory of Arthur F. Palmer, please click here to visit our Sympathy Store.

F.North Thetford, VT - Arthur F. Palmer, 78, died on Friday, December 20, 2013 at home on the family farm where he was born, after a period of declining health. He was born on November 17, 1935 in North Thetford. Son of A. Maxwell Palmer and... View Obituary & Service Information

The family of Arthur F. Palmer created this Life Tributes page to make it easy to share your memories.

Send flowers to the Palmer family.