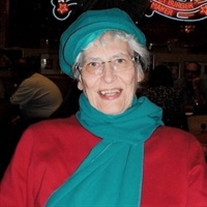 Barbara Mae (Haskins) Pillsbury, passed away Tuesday, January 11 2022 at The Prescott House, North Andover, MA. She was born on December 9, 1932 to Charles A. Haskins and Mabelle (Emerson) Haskins, both of Bradford VT. Barbara attended and graduated from Bradford Academy, class of 1950. Barbara married George “Jack” Pillsbury, son of Ralph and Muriel “Mid” Pillsbury, also of Bradford, in 1950 and moved to Boston. Jack and Barbara lived in Andover, Massachusetts for most of their 29 year marriage, until Jack’s death in 1979. Barbara worked as a Bookkeeper, Office Manager and Human Resource Specialist over the 36 years that she lived in Massachusetts. Barbara moved back to Bradford in 1986, living on the Plateau, caring for her father and working for United Developmental Services and later, at Dartmouth Hitchcock Medical Center. She was an active member of the Grace United Methodist Church, where she was Treasurer and put on many wonderful chicken pie dinners. Barbara retired from Dartmouth Hitchcock in 1997, when she moved to Lake Havasu City, Arizona and led an active retirement. Barbara moved back to Massachusetts in 2011 to be closer to her children. Barbara is survived by her daughter and son-in-law, Karyn and Michael French of Glenside PA, son Kent Pillsbury of Jalisco Mexico, son and daughter-in-law Kane and Ellen Pillsbury of Exeter NH, daughter Karla and her wife Annette Voss of Haverhill, MA, Grandchildren Sara & Lou Vitale, Jason & Amy Merrill, Aaron Merrill, Max Pillsbury & fiancé Molly Skerry, Flynne Hassler, great grandchildren Colin Merrill, Kane, Louie, and Teyah Vitale, Mavis Merrill.Services will be held in Bradford in the spring. In lieu of flowers, please make donations to the Alzheimer’s Association or the ASPCA. To plant Memorial Trees in memory of Barbara Mae Pillsbury (Haskins), please click here to visit our Sympathy Store.

Barbara Mae (Haskins) Pillsbury, passed away Tuesday, January 11 2022 at The Prescott House, North Andover, MA. She was born on December 9, 1932 to Charles A. Haskins and Mabelle (Emerson) Haskins, both of Bradford VT. Barbara attended and graduated... View Obituary & Service Information

The family of Barbara Mae Pillsbury (Haskins) created this Life Tributes page to make it easy to share your memories.