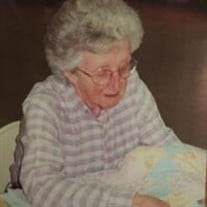 Bradford, VT-Betty Sweitzer, 96, of South Pleasant Street died September 29, 2019 at her home.She was born August 9, 1923 in Reading, PA the daughter of Earl Becker and Ruth (Schlotman) Becker. She received her education in multiple schools in the Reading, PA area, and graduated high school as salutatorian. After her schooling on October 16, 1941, she married Harry Arthur Sweitzer in Bernville, PA.After World War II, Betty and Harry bought a small farm where she took care of animals, while he worked in a factory. She moved to Bradford, VT in 1986 after his death, to live with Claire Robitzer and her family.Mrs. Sweitzer was active knitting and crocheting for Church World Services thru the United Congregational Church in Bradford, VT. She was also a co-leader for the local Girl Scout Troop and loved camping.Survivors include a son, Terry Sweitzer (Lasell Bartlett) of Lynch Station, VA, and a daughter, Claire Robitzer of Bradford, VT, two grandsons, and a great-grandson. She was predeceased by her parents, a brother, Robert Becker, and a granddaughter, Jennifer Robitzer.Graveside funeral services will be held at the convenience of the family in Sawyer Cemetery in Bradford, VT. Arrangements are by Hale Funeral Home of Bradford, VT. To plant Memorial Trees in memory of Betty Sweitzer, please click here to visit our Sympathy Store.

The family of Betty Sweitzer created this Life Tributes page to make it easy to share your memories.

Send flowers to the Sweitzer family.