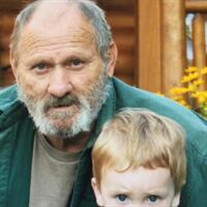 Billy Aldrich, of Orford, NH, passed away peacefully on December 14th, at the Jack Byrne Center in Lebanon, surrounded by family and friends. Billy was born December 8, 1948, the oldest child of the late Robert E. Aldrich and Alice (Dube) Aldrich. Billy is survived by his five siblings and their spouses: Henry Aldrich and Karen McGonis of Plainfield, Louise and Maurice Langley of Lebanon, Yvonne Aldrich of Pennsylvania, Patricia and Brian Stout of Hartford, and Sally and Michael Conrad of Canaan. Also, son Jason, his wife Kari, and grandson, Tayton Ladd, as well as many nieces and nephews.Billy grew up in Lebanon and attended Lebanon High School. He joined the army in 1967, earning his GED, and spending a year of service in Vietnam. There, he operated a bulldozer as part of a Specialty Construction Engineering Crew, building roads and landing zones. Billy received the National Defense Service Medal, Vietnam service medal and Vietnam campaign medal for his service as well as a sharpshooter badge and Marksman badge.Billy returned to Lebanon and married Linda Brown in 1971. Together, they moved to Orford where their son, Jason was born. Billy remained in Orford the rest of his life.Billy loved the outdoors. His father, Rob, instilled in him a love of hunting, which continued throughout his life. Billy liked to tell the story of getting his first deer when he was hunting alone near Poverty Lane in Lebanon. He was so proud of the deer, he dragged it all the way home to Church Street by himself. His father laughed about that and said that he would have helped him get the deer home. But Billy wanted to do it himself.Billy became a skilled outdoor sportsman. Between hunting and fishing, he was outside year-round. He was an expert on the woods, streams, and ponds in Orford and surrounding miles. He hunted with bow, muzzle loader, and rifle, getting a deer every year. He made a mean venison stew. Billy also raised hunting dogs, including Blue Tick Hounds and beagles. Of the many dogs he trained, his last two beagles, Rose and Mary, were his favorites.Billy's work at Dartmouth College on the Grounds Crew gave him the opportunity to be outside every day. He worked there for over 40 years, retiring in 2011. After retirement, some health issues kept him for a time from hunting, but he installed an outdoor motion-sensor camera that shot pictures of deer and bear in his backyard instead.Billy was loved by many people. When he married Linda Brown, he became Ruth Brown's dearly loved son and brother to Diane and Lori. He had a special friendship with neighbors Matt and Nicole Gray. He helped Matt with landscaping and Nicole kept Billy well-fed with homemade meals andBilly's favoritechocolate brownies. His brother and sisters were very close to Billy, spending special time with him this past summer, going out for lunch and to the Cornish Fair. Billy was a much-loved uncle to his nieces and nephews. Jason, daughter-in-law Kari, and 6 year-old grandson, Tayt were so excited when Billy visited them for the first time in Denver in May. In July, they were able to come east, spending a week with Billy in Ocean Park, Maine.Billy is gone too soon, but he leaves us precious memories. We're so fortunate to have had him, even for a short time, in our lives.A wake will be held Thursday, 5-7pm, December 19, 2019, at Hale's Funeral Home in Bradford, VT. There will be no funeral. A small burial service will be held sometime in the spring. To plant Memorial Trees in memory of Billy Aldrich, please click here to visit our Sympathy Store.

The family of Billy Aldrich created this Life Tributes page to make it easy to share your memories.

Billy Aldrich, of Orford, NH, passed away peacefully on December...

Send flowers to the Aldrich family.