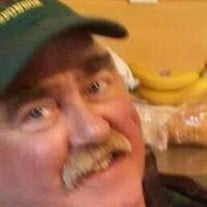 Blayne Hill, 59, of West Fairlee, VT died Thursday October 10, 2019 at his home on Wild Hill Road.He was born November 24, 1959 to Enoch Hill and Nancy Ann Martin.Blayne loved hunting and fishing, working outdoors, and spending time with his family. After serving four years in the United States Air Force from 1977-1981, he settled in West Fairlee with his wife, Anne Hill and together they built a business that still operates today. Blayne also worked as a caretaker/carpenter for Girl Scouts of America and Camp Akeela in Strafford, VT. He was an exceptional meat cutter, a skill he inherited from his father, and passed on to many others over the years.He is survived by his partner, Karen McCusker and her three sons, Jared, Alex and Cody, two children, Clinton (Stacie) Hill of West Fairlee, and Caitlin (Kevin) Mcphee of Orford, NH, five grandchildren that he adored, Connor, Kristen, Kacie, Samantha and Kendall. He will be missed dearly by all who knew him.Funeral services will be held Sunday, October 13, 2019 at 1 pm at the residence of Raymond and Nancy Stone on Rte. 244 in Post Mills, VT. In lieu of flowers, donations can be sent to a mental health organization of your choice. Graveside burial will be private at a later date. Arrangements are by Hale Funeral Home of Bradford, VT To plant Memorial Trees in memory of Blayne Hill, please click here to visit our Sympathy Store.

The family of Blayne Hill created this Life Tributes page to make it easy to share your memories.

Send flowers to the Hill family.