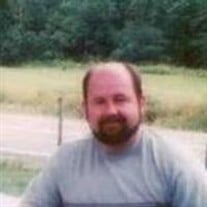 East Corinth, VT- Brian N. Grant, 47, of East Corinth, VT died on Tuesday, August 7, 2012 at his home unexpectedly. Brian was born on November 6, 1964 in Woodsville, NH the son of Wendell and Marie Grant. He grew up in Bradford, VT where he attended Bradford Elementary School and graduated from Oxbow High School. Brian was a very hard worker, in his teens he worked at the Underhill farm, later on he built kitchen cabinets for Oakes Brothers in Bradford, VT. With his talent and love for wood that would lead him to doing many more projects for people and businesses throughout the upper valley. His last job would take him to a private estate in Norwich, VT, his responsibilities included care of horses, taking care of the grounds and buildings on the property. Brian thoroughly loved life. He was always willing to try anything, he loved to hunt, it didn't matter if it was for deer, moose or bear he just loved it. It could also be target shooting too. Two weeks before his death his son Dustin brought his new pellet gun up and they target shot, his son laughed that his dad beat him 9 out of 10 times. He enjoyed helping his friend John with boiling sap at the sugar house in the spring. He enjoyed riding his motorcycle, snow machine and four wheeler, his son Colton and Brian's friends loved four wheeling together for countless hours, he loved tinkering on vehicles, he and his son Colton rebuilt two pick-ups from the frame up., it was through these times that he taught Colton so much about mechanics. Brian was such a great Dad, his boys were his life, he was the fun father that his son's friends loved to be around. He was just a great guy that was known for his big smile and bear hugs. Brian suffered a severe stroke three years ago but it never destroyed his spirit, he continued to fight to move forward. Whenever you went to see him he would greet you with that big smile. He will be missed so much. He is survived by two sons, Colton and Dustin and his wife Chrystal and daughter Emma; his mother, Marie Drew and her husband Dennis of North Haverhill, NH.; one brother, David and his wife Deborah Grant and their two sons Hayden and Jonathan; one sister, Trudy Adams and her daughter, Elizabeth, fiancAC. Travis Benway and daughter Alexis; many uncles, aunts and cousins. A graveside service will be held on Thursday, August 16, 2012 at 10am in the family lot in Sawyer Cemetery in Bradford, VT. There are no calling hours. In lieu of flowers donations in his memory may be sent to the East Corinth VT fast Squad. The Hale Funeral Home of Bradford, VT is in charge of arrangements. To view an online guestbook go to www.halefuneralhomes.com To plant Memorial Trees in memory of Brian N. Grant, please click here to visit our Sympathy Store.

East Corinth, VT- Brian N. Grant, 47, of East Corinth, VT died on Tuesday, August 7, 2012 at his home unexpectedly. Brian was born on November 6, 1964 in Woodsville, NH the son of Wendell and Marie Grant. He grew up in Bradford, VT where he... View Obituary & Service Information

The family of Brian N. Grant created this Life Tributes page to make it easy to share your memories.

Send flowers to the Grant family.