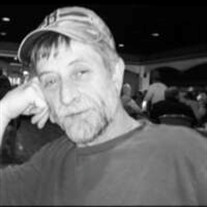 Bradford, VT- Bryan Keith Taylor, 59, passed away peacefully October 28th surrounded by family after a brief courageous battle against lung cancer.He was born in Woodsville, NH, May 4, 1957 son of Keith Taylor and Eleanor (Palmer) Taylor. He married Deanna Brown in July of 1975, had his first daughter in 1976 and divorced shortly after. He remarried Tina Claflin on June 5th 1982.Bryan attended Bradford Academy and graduated from Oxbow High School in 1976. He worked for the State of Vermont right out of high school and Bradford Tire and Auto. He spent the last 35 years dedicated to Bond Auto where he was a store manager then went to work in the call center. He was a well known member to the Bradford community and was dedicated to helping anyone in need whether it is for an afterhours part run, fix a car or whatever they needed. People knew they could count on him no matter the time of day.He enjoyed working on cars, hunting, camping, baseball, racing and most of all spending time with his family.Bryan was predeceased by his father, Keith Taylor in 1996. He is survived by his wife of 34 years, Tina; his mother, Eleanor of Bradford, VT. Four Children - Darcy Taylor-Smith and companion Dave Beloin of Enfield, NH, Jessica Bean and spouse Seth of Windsor, VT, Ryan Taylor and spouse Kasey of West Topsham, VT and Linsey Taylor and fiancé Craig Kelley of Bradford, VT. Ten Grandchildren - Isaiah Taylor, Connor Bean, Haleleigh Bean, Brittney Smith, Wyatt Bean, Jaelyn Smith, Avery Bean, Owen Taylor, Lillie Kelley and Leslie-Mae Kelley. He also leaves one brother Thomas taylor, two sisters Susan Hatch and Cynthia West, several aunts, uncles, nieces, nephews and cousins.A celebration of his life will be held on Friday, November 4, 2016 at 1 pm at Hale Funeral Home, 187 Upper Plain, Bradford, VT. Visiting hours will be held on Thursday evening from 6-8 at Hale Funeral Home. Burial will be held at a later date.The Hale Funeral Homes and Cremation Care of Bradford, VT is in charge of arrangements.To view an online guestbook go to www.halefuneralhomes.com To plant Memorial Trees in memory of Bryan Keith Taylor, please click here to visit our Sympathy Store.

The family of Bryan Keith Taylor created this Life Tributes page to make it easy to share your memories.

Send flowers to the Taylor family.