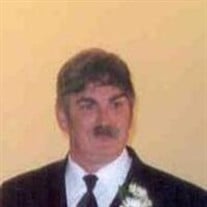 He was born at Cottage Hospital in Woodsville, NH on August 14th, 1953 to Genieve & Reginald Bagley of Bradford, VT. He graduated from Oxbow High School in 1973. Skip joined the Vermont Army National Guard July 21, 1974 and retired July 20th, 1999. He had been employed by the State of Vermont, and retired after just shy of 31 years, and was currently employed at Oxbow High School as a custodian. Skip was a lifelong upper valley resident- who was very dedicated to the volunteer Fire Department in which he served for 35 years. He was an avid race fan, who rarely missed the green flag. He enjoyed tinkering in his work shop, building new things, fixing different things around the house even if they didn't need fixing, and always willing to help anyone who needed anything done. After Skip's retirement from both the State of Vermont and Vermont Army National Guard, he made regular trips to "check in on the boys" and see what was new. Mr. Bagley married the former Janelle Bishop on August 11th, 1984. Survivors include his wife of 28 years Janelle Bagley of Bradford, one son, Zachary Bagley and fiancAC. Arrin Robinson of Bradford, and two step-grandchildren Breanna & Olivia. One daughter, Danielle Burroughs and her husband Timothy of West Newbury, two grandchildren Preston and Cole. He is also, survived by two sisters, Marion Bagley Duclos of Leominister, MA along with Linda Bagley Wilson and her husband Stanley of Jaffrey, NH. Along with nieces, nephews, cousins and in-laws. He was predeceased by his father and niece in 1991, and his mother in 2003. There will be no calling hours. A Celebration of life will be held Saturday, February 4th, 2012 at 1:00 pm at the Bradford Academy, Bradford, VT with a reception following at The Bradford Fire Station. In lieu of flowers may be made to the Bradford Fire Department in memory of "Skipper". Hale funeral home in Bradford, VT is in charge of the arrangements. To view an online guestbook go to www.halefuneralhomes.com To plant Memorial Trees in memory of Carl "Skip" C. Bagley, please click here to visit our Sympathy Store.

The family of Carl "Skip" C. Bagley created this Life Tributes page to make it easy to share your memories.

He was born at Cottage Hospital in Woodsville, NH on August 14th,...