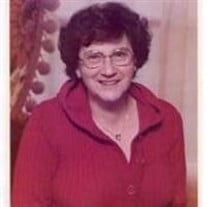 A long time resident of Bradford, VT. Carolyn Chapin Sanborn, 83 passed away peacefully on September 28, 2012at Valley Terrace, Wilder, VT, after living many years with Alzheimer's. Carolyn was born Jan 15, 1929 in Hanover, NH. The daughter of Orrin S. and Alice (DeGoosh) Chapin.Carolyn graduated from Orford High School in 1947 as valedictorian. Carolyn met her husband Richard H. Sanborn at a dance at Lake Morey Casino and they were married the following summer, June 21, 1947.After living in South San Gabriel, California, they returned to the Upper Valley to raise their family. They operated a family plumbing and heating business for thirty years on South Pleasant St, in Bradford, VT where one of Carolyn's many roles included bookkeeping. After her husband's death in 1980, she worked as a bookkeeper for Nichol's Hardware in Lyme, and JM Landscaping in Bradford.Carolyn sold Fuller Brush door to door for more than twenty years, and joked about being the Fuller Brush Man. She volunteered for several years through the Bradford senior center, as a trained IRS volunteer for the Tax Counseling for the Elderly Program. She was an accomplished seamstress making a wide variety of items, including her daughters' wedding gowns.Carolyn enjoyedwalking her two mile routearound Bradford village in all seasons, rarely missing her morning jaunt in twenty years. She enjoyed gardening and being outdoors. Winter was her favorite season, she eagerly awaited the first snow fall. Sheenjoyed ice skating and sledding with her children and grandchildren. Carolyn is survived by her five children; a son, Cedric Sanborn and his wife Leslie of Barre, VT and four daughters, Jane Svetaka of White River Jct, VT; Suzanne Pazdro and her husband Russ of Corinth, VT; Darcy Keysor of Richton Park, IL; and Daphne Nettleship and her husband Kenneth of Turner, ME. Ten Grandchildren, Jeremy, Jamie and Peter Svetaka; Christopher, Jonathan and Timothy Sanborn; Olesia and Averill Pazdro; Mitchell and Nichole Keysor. ThreeGreat Grandchildren; Ryan Sanborn, Caleb Fisher, and Isha Keysor, and also several nieces and nephews. She was predeceased by her husband, parents, two brothers Orrin and Conrad Chapin and sister Ruth Royce. The family would like to convey a special thanks to the wonderful staff at Valley Terrace for the love and attention they have shown Carolyn. A graveside service for friends and family will be held at the Sawyer Cemetery, Bradford, VT at2:00p.m. Saturday, October 6, 2012.In honor of Carolyn's free spirit,we ask all in attendance to wear something red. Immediately following the service, there will be a celebration of her life,at the home of her daughter Suzie Pazdro in Corinth, Vt. . In lieu of flowers to honor her love of reading and learning, donations can be made to the Bradford PublicLibrary,P.O Box 619, Bradford, VT 05033.www.bradfordvtlibrary.org The Hale Funeral Home of Bradford, VT is in charge of arrangements. To view an online guestbook go to www.halefuneralhomes.com To plant Memorial Trees in memory of Carolyn Chapin Sanborn, please click here to visit our Sympathy Store.

The family of Carolyn Chapin Sanborn created this Life Tributes page to make it easy to share your memories.

Send flowers to the Sanborn family.