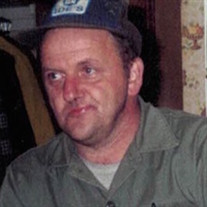 Corinth, VTClifford H. Rood, Jr., 71, of Claflin Road passed away Saturday, February 10, 2018 at his home following a short illness.He was born on November 11, 1946 at home that was the former parsonage besides the Meadow Church in Corinth, VT, he was the son of Clifford H. and Bernice (Comstock) Rood, Sr.Clifford attended school in Corinth, while also helping his grandfather (Ray Comstock) run the farm, until 1964. He then worked at Bowen Hunters Bobbin Mill until it burned, Jackman's Bobbin Mill, Dixie Bobbin Mill, and he retired from the Bradford Veneer & Panel Mill.On June 10, 1972, he married Josephine Goodspeed at West Corinth, VT. They had three children together and later divorced.Living with Harold and Claudia Smith since 1977, he worked on the Smith farm, raking, and baleing hay, and doing chores. He enjoyed hunting and fishing. He also helped to cut Christmas wreaths brush for wreaths, and hung the wreaths on the Waits River Church doors. He also mowed lawns, helped with work on the Locke Farm that the Smiths oversaw and he also enjoyed helping friends and neighbors with odd chores.Besides his parents, he is pre-deceased by a brother Russell Comstock.He is survived by his son Joseph Smith (Allisa), Sr., and grandson Joseph Smith, Jr., of Bradford, VT; three children who reside in Florida- Wendy Rood, Jason Rood, and Richard Rood and grandchildren Christopher and Brittney Koplas; a brother Rodney Rood of Groton, VT; several nieces, nephews, and cousinsA Funeral Service will be held at 11am Saturday, February 17 at New Hope United Methodist Church in Waits River. Burial will be in the Spring at East Corinth New Cemetery.Calling hours will be held from 6:00pm to 8:00pm Friday, February 16 at Hale Funeral Home, 187 Upper Plain, Bradford, VT.Online guestbook at www.halefuneralhomes.com. To plant Memorial Trees in memory of Clifford H. Rood, Jr., please click here to visit our Sympathy Store.

Corinth, VTClifford H. Rood, Jr., 71, of Claflin Road passed away Saturday, February 10, 2018 at his home following a short illness.He was born on November 11, 1946 at home that was the former parsonage besides the Meadow Church in Corinth,... View Obituary & Service Information

The family of Clifford H. Rood, Jr. created this Life Tributes page to make it easy to share your memories.

Send flowers to the Rood, family.