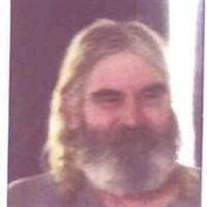 Piermont, NH- Dale R. Fields, 57, of Piermont died suddenly at his home on January 3, 2012. Dale was born in Hanover, NH the son of John and Meda Fields of Lyme, NH. After graduating from Orford High School in 1972, Dale worked for thirty-five years for Linrock Drilling and Blasting. Dale was married to Patricia Vanells on August 18, 1979 Dale was well known for his wonderful sense of humor and his mischievous grin. He enjoyed warm spring afternoons collecting sap to make maple syrup with family, friends, especially his long time pal, Lyle Quackenbush, and with his numerous dogs past and present. He created spectacular stonewalls, patios and fire pits. Many a mosquito biting summer evening, you could find him fishing with his wife and children. Skunked! Dale loved the great outdoors and was able to do some hunting with son Matthew and his future son in law Jake Woodward this past fall. There were many enjoyable, long walks in the forest (excluding being attacked by yellow jackets with the Uline family), and many fond memories around the fire. He cherished special occasions with his wife, children, and friends, having dinners, barbeques, and sliding parties. Last, but not least, he was notorious for his late night snacks of cheese and peanut butter crackers with a glass of milk. Dale is survived by his wife Patricia ( Vanells) Fields of Piermont, NH.; one son, Matthew Fields of Piermont, NH.; two daughters, Heather Fields of Bradford, VT and Katherine Fields of Fairlee, VT.; two brothers, Bruce and James Fields; two sisters, Joan Durkee and Carol Hurlbert, and several generations of nieces and nephews. Dale was predeceased by his parents, two sisters, Maryjane Huntington and Joyce Fields. A celebration of Dale's life will be held on Monday, January 9, 2012 at 4 pm at Bailey's Tavern in Fairlee, VT. There are no calling hours. Burial will be held at a later date. The family will also be hosting a memorial service at Dale's Home, to be announced in the spring. The Hale Funeral Home of Bradford, VT is in charge of arrangements. To plant Memorial Trees in memory of Dale R. Fields, please click here to visit our Sympathy Store.

Piermont, NH- Dale R. Fields, 57, of Piermont died suddenly at his home on January 3, 2012. Dale was born in Hanover, NH the son of John and Meda Fields of Lyme, NH. After graduating from Orford High School in 1972, Dale worked for thirty-five... View Obituary & Service Information

The family of Dale R. Fields created this Life Tributes page to make it easy to share your memories.

Send flowers to the Fields family.