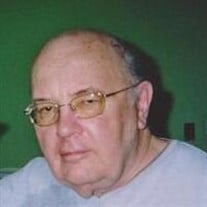 David Burton Bryan died Wednesday, April 2, in South Pittsburgh, Tennessee, after a long battle with Alzheimer's disease. David was born in Windsor, Vermont, on April 27, 1940, the son of the late Frank MacLlewellyn Bryan of Montpelier, and Jeanne Constance (Allen) Bryan of Windsor. He is survived by his wife of 25 years Esther Jean Osborne. He also leaves behind his stepchildren, Richard Facemyer and his wife Lynn of Ashland, Missouri; Evan Facemyer and his wife Sheri of Knoxville, Tennessee; and Dana Facemyer and his wife Lori of Lindon, Utah. He is also survived by his brother Frank Bryan and his wife Melissa Lee of Starksboro; his sister Jane Bryan of Germantown, Maryland; and numerous nieces, nephews and cousins. David grew up in Newbury, Vermont, and graduated from Newbury High School in 1958. In his youth he worked at various summer jobs including digging ditches for a plumbing contractor (before the era of "backhoes") and for the town road crew mostly picking stone behind the grader. His academic interests were in physics, chemistry, and astronomy. He became the youngest member of the American Meteorological Society and was credited with registering several meteor sightings to that organization. He also earned a Certificate of Appreciation from the U.S. Air Defense Command and was named an honorary member of the Air Defense Team of the U.S. Air Force for his work in the Ground Observers Core in the late 1950s. His interests at that time also included hiking the peaks of the White Mountains, playing the piano (he also played the organ at midnight masses in Bradford as a high school student, often walking the seven miles home afterwards in sub-zero temperatures), and acting in school plays (where David and Jean played the leads in Anton Chekhov's "The Boor" in which small Newbury High School with about fifty students reached the semi-finals of the state one-act play contest for high schools defeating much bigger schools like Spaulding and Montpelier). David attended St. Michael's College in the fall of 1958 and majored in Chemistry. At that time his theological interest deepened and he joined the Society of St. Edmunds as a seminarian beginning his studies for the priesthood. He was ordained in and said his first mass at Our Lady of Perpetual Help in Bradford. David then entered the professoriate at St. Michael's teaching a variety of courses. He entered the doctoral program in Near Eastern Studies at Johns Hopkins University, earning his Ph.D. in 1973. His thesis was entitled "Texts Relating to the Marzeah." David then returned to St. Michael's College as a full-time professor He also became well known in Franklin and Grand Isle counties for his pastoral work often saying multiple masses on weekends. David was the Founding Director of the Permanent Diaconate Program in the Catholic Diocese of Burlington and later served as President of the Green Mountain Folklore Society. After being granted a papal dispensation, David left the priesthood and married Jean Osborne in 1988 in New Bedford, Massachusetts. David held an administrative position in the mayor's office in Boston before returning to Vermont where he finished his career as the Director of Programs and Volunteers at the Ethan Allen Homestead and Museum while residing in Montpelier. David wrote two books: A Western Way of Meditation: The Rosary Revisited and From Bible to Creed: A New Approach to the Sunday Creed and an unpublished manuscript entitled Women of the Wilderness: Frances Montressor and Fanny Margaret Allen. He also participated in the "Adoration of the Eucharist" program at St. Augustine's Church in Montpelier where he often walked to the church between the hours of midnight and dawn as part of his daily routine. The many people who knew and loved David remember him for his scholarship of biblical studies and for his love of his home state, Vermont. They remember him for his never-failing kindness, modesty, compassion for others, and devotion to his family and to the Catholic faith. After his Alzheimer's diagnosis, David and Jean moved to Tennessee in 2008. Throughout his long illness, David was blessed by the constant presence and care of this truly remarkable woman. Calling hours will be from 6-8 pm Monday evening, April 7, at Hales Funeral Home in Bradford, Vermont. Funeral services will be at 11 am on Tuesday, April 8, at Our Lady of Perpetual Help in Bradford. In lieu of flowers, contributions may be made to any of the following: The Tenney Memorial Library in Newbury; the Ethan Allen Homestead and Museum in Burlington; the Permanent Diaconate Program of the Catholic Diocese of Burlington. Burial will be at the convenience of the family later in the spring in Newbury. Funeral arrangements are being handled by the Hale Funeral Home of Bradford, Vermont. To view an online guestbook go to www.halefuneralhomes.com To plant Memorial Trees in memory of David Burton Bryan, please click here to visit our Sympathy Store.

David Burton Bryan died Wednesday, April 2, in South Pittsburgh, Tennessee, after a long battle with Alzheimer's disease. David was born in Windsor, Vermont, on April 27, 1940, the son of the late Frank MacLlewellyn Bryan of Montpelier, and... View Obituary & Service Information

The family of David Burton Bryan created this Life Tributes page to make it easy to share your memories.

Send flowers to the Bryan family.