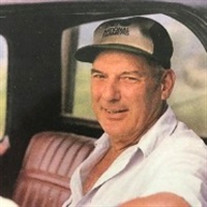 Wells River, VT- Delbert A. Leete, 90, died on June 2, 2017 at Cottage Hospital in Woodsville, NH with his family at his side.He was born in Groton, VT on November 28, 1926. He was married to Shirley Hill on July 5, 1947, he was looking forward to their 70th wedding anniversaryDelbert was a strong hardworking "Vermonter". He was a true "Yankee" you could not find anyone who was more conservative or independent. Family was first and foremost, he loved family gettogethers and stressed the importance of keeping them going. Gardening was an enjoyment and he could be seen selling vegetables out of the back of his pick-up along route 302 and route 5.Delbert and Shirley started off farming at the "LaBounty" farm in 1949 in Newbury, VT. They bought and moved to the former Atwood farm in 1950 in Newbury, VT., this farm now is the location of P&H Truckstop, which Delbert and Shirley started as Del's Diesel and Diner in 1981, after interstate 91 bisected the original farm. In 1973, they moved their dairy operation to the Butson farm in Newbury, VT and farmed there until 1993 and retired. This farm was historically known for the large round barn that majestically set off the east side of Route 5 about a mile south of Wells River Village.Farm auctions and sugaring were an enjoyment. The Leete family Sugar House still stands across the highway from the round barn.Delbert was known for his business accomplishments. He had a variety of ventures over the years from, running the farm, selling parcels of land, owning a landfill, making and selling Maple Syrup, having barn dancing's, upstairs at the Atwood farm, establishing Del's Diesel and Diner, and owned a sausage business, "VT Country Sausage". He also was the author of two books, "My Time in Vermont" and "Just Common Sense".Over the years Delbert served as a Selectman and a Justice of the Peace for the Town of Newbury, VT., he had been a member of the Ayrshire Breeders Association, he raised champion Ayrshires over the years, he also belonged to the Nation Farmers Organization becoming a director. Delbert and Shirley traveled all across Vermont in an effort to get farmers organized.He is survived by his wife Shirley, three daughters, Sharon Cassidy, Barbara Anne St. Laurent and Joe Maccinni and Linda L. Laviletta and Don Gregory, ten grandchildren, Ryan Cassidy and wife Maria, Randy Cassidy and Jen Jalbert, Rachel Phillips and husband Eric, Rebecca Cassidy and Matt Blodget, Kevin Horne and wife Sherry, Scott Horne and wife Nicole, Anthony Laviletta, Lori Taylor and husband Matt, Kelli Buttersworth and husband Jeff and Sarah Leete and husband Corey Provost, nineteen great-grandchildren; one sister Ruth Page of Boltonville, VT.He was predeceased by son Gary who died on April23, 2017, mother Ruth G. Leete, brothers Stewart and Duncan Leete.Funeral services will be held on Tuesday, June 13, 2017 at 2 pm in the South Ryegate Presbyterian Church with Rev. Carol Ann Barker officiating. Visiting hours will be held on Monday evening June 12, 2017 from 5-8 pm at Hale Funeral Home, 187 Upper Plain, Bradford, VT. Burial will follow the service in the family lot in the Boltonville Cemetery.In lieu of flowers to honor Delbert's memory his family ask that you please support an organization of your choice.The Hale Funeral Home and Cremation Care of Bradford, VT is in charge of arrangements.To view an online guestbook, go to www.halefuneralhomes.com To plant Memorial Trees in memory of Delbert A. Leete, please click here to visit our Sympathy Store.

The family of Delbert A. Leete created this Life Tributes page to make it easy to share your memories.

Send flowers to the Leete family.