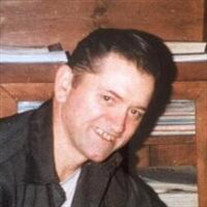 LYME, NH - Devey Allen Piper, 74 Passed away in his home in Lyme, NH on Sunday January 11th from a stroke and general health failure. He was born February 9th 1940 in Hanover, NH. He was the son of Walter Joseph and Vivian (Gregory) Piper. Devey attended the Austine School for the deaf in Brattleboro, VT after which he attended Hartford School for the Deaf in Hartford Connecticut. After graduation, he went with his uncle, John Devey Piper, to Montana and worked under apprenticeship for carpentry. After several years in Montana, he returned to the upper valley and married his sweetheart Beverly Mae Hickey. They had two beautiful daughters and enjoyed many happy years together. Devey enjoyed being a dad and helping his parents on Pony Hill, where he grew up. He loved to fish and hike with his faithful dog Spunky at his side. He was hard working and held many jobs in spite of his disabilities. He worked over 20 years at the Rochester Shoe Tree in Ashland, NH, as a Shaper Mechanic and retired in 2006. After which he moved to his sister's homestead in Lyme, NH. He enjoyed watching her horses and dogs - he liked puzzle games and his many feathers friends that enjoyed his generous bounty. In his retirement, Devey enjoyed many visits from his special deaf and hearing friends. It was always a happy occasion when his sisters visited him. While he was a quiet man, he was full of spiritual emotions that showed his true love of life. Devey is survived by his daughters, Lisa Piper & Shane Witham of Laconia, NH and Olivia & Frederick Janson of Summerville, SC. He is also survived by his grandchildren, Candee Dill, Lee Piper, Travis Morrissette, Kory Morrissette and two great grandsons, Brayden Morrissette and Owen Wyatt also of Laconia, NH. Four sisters, Beki Maurello-Pushee & Bruce of Elizabethtown, NY, Linda & Jack Ducharme of Chelsea, VT, Ellen & Charlie Brown of South Strafford, VT and Katherine Perkins-Gray & Bruce of Lyme, NH. He also left four nephews, Leland Maurello, Rexland Perkins, Shannon Perkins and Frank & Jessica Brown. Graveside services will be held at a later time for family and friends. Special thanks to his caregivers. Memorial Contributions may be made to the VT, NH Visiting Nurse & Hospice Chapters, PO Box 976, White River Junction, VT 05001. The Hale Funeral Homes and Cremation Care of Thetford, VT is in charge of arrangements. To view an online guestbook go to www.halefuneralhomes.com To plant Memorial Trees in memory of Devey Allen Piper, please click here to visit our Sympathy Store.

LYME, NH - Devey Allen Piper, 74 Passed away in his home in Lyme, NH on Sunday January 11th from a stroke and general health failure. He was born February 9th 1940 in Hanover, NH. He was the son of Walter Joseph and Vivian (Gregory) Piper. Devey... View Obituary & Service Information

The family of Devey Allen Piper created this Life Tributes page to make it easy to share your memories.

Send flowers to the Piper family.