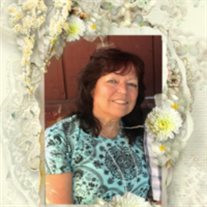 Dianna Louise Hayward, age 66 of Corinth, Vermont passed away peacefully after a long courageous fight with a terminal illness, with her husband and children by her side. Dianna grew up in Corinth, Vermont where she attended Corinth grade school and graduated from Spaulding high school. At age 17 she met the love of her life and high school sweetheart Philip Hayward while attending Spaulding High school. They were soon married on August 27, 1972, in a beautiful garden wedding surrounded by their closest family and friends. Together they welcomed three children and enjoyed nearly 50 years of marriage to one another. Dianna was a beautiful, wonderful woman who has helped and touched so many of the lives she had crossed. Most of those who knew her, considered her a mother figure. She was the kind of woman who gave everything she could to everyone, even before herself. She simply was the glue that held us all together. Dianna loved her grandchildren more than anything in this world and took great satisfaction in loving and spoiling each of them. In her later years, Dianna loved traveling to warm, tropical places with her best friends and tried to enjoy her life to the fullest. Her favorite holidays were Easter and Christmas, for which she took immense pride in decorating her home, gift giving (she was often referred to as Mrs. Claus) and spending time with her family. Dianna leaves behind her husband of 49 years, Philip Hayward of Corinth, VT. Her daughters, Eva Hayward of Albuquerque NM, Jennie Fischer-Vear and her husband, Lorin Vear, of Waterford, VT, and Elizabeth Hayward of Falmouth, ME. She also leaves behind her grandchildren, Ashton Fischer, Jaxson Callahan, and Delia Vear. She is survived by her mother, Shirley Eastman of Corinth, VT, Her brother, Larry Eastman of Corinth, VT and her sister, Dawna Fox of Topsham, VT. She also leaves behind beloved nieces and nephews who meant so very much to her. Her life was blessed with an abundance of family and friends, too many to even begin to list. She was predeceased by her father, Lyle Eastman of Corinth, VT and her sister-in-law, Cynthia Eastman of Topsham, VT. Calling hours for Dianna will be held at Hales Funeral Home in Bradford on Friday, December 3rd from 6 ~ 8 pm and will be open to the public. A memorial service will be held Saturday, December 4th at Hale Funeral Home at 1:00 pm.  A reception will be held at the Little Grill at the Mill in Bradford after the service. Hale Funeral Home is assisting the family with arrangements. To plant Memorial Trees in memory of Dianna Louise Hayward, please click here to visit our Sympathy Store. There are no gallery images. #recaptcha-container label { display: none } Upload a Photo Label: * Image: * Gallery: Obituary Photos Required Confirmation: Upload Gallery Image

Dianna Louise Hayward, age 66 of Corinth, Vermont passed away peacefully after a long courageous fight with a terminal illness, with her husband and children by her side. Dianna grew up in Corinth, Vermont where she attended Corinth grade school... View Obituary & Service Information

The family of Dianna Louise Hayward created this Life Tributes page to make it easy to share your memories.

Send flowers to the Hayward family.