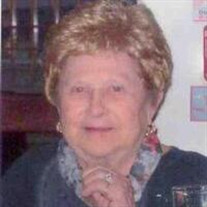 Born on January 24, 1929 in Chicago, IL, she was the daughter of William and Dorothy B. (Henry) Piper. At age 4, her family moved to Market Street in Lyme, NH where she resided most of her life. She was educated at Lyme Elementary School and Hanover High School. On June 14, 1946, she married Zane Campbell. They raised their family in Lyme, NH. Later in life she and Zane owned and operated the Lyme Country Store for many years. Over the years they were involved in many community activities. After the sale of the store, she worked at various jobs including her grandsons store, Patterson's Grocery and Deli, and for a period of time she made her notorious doughnuts and other home baked goods out of her home - selling to local stores in neighboring towns. She enjoyed knitting and other crafts, baking, bird watching, puzzles, antiquing, camping, and travelling in the RV. The ocean and the mountains and Mashantucket, CT were a few of her favorites places. She was also a devoted Boston Red Sox fan, rarely missing a game on T.V. and knowing the team players better than most from year to year. "As the heart of her family", she will be remembered as a loving, giving, caring, and devoted mother, grandmother, great-grandmother, sister, and friend. Besides her parents, she is pre-deceased by her husband Zane (Sept 5, 2000), two brothers William and Ronald Piper, son- in- laws Ronald Patterson Sr., Larry Peavey, Gary Porter and Edward Adams. She leaves three daughters Julie C. Bell of Orford, NH, Carol Porter and Christie Adams both of White River Junction, VT; five grandchildren Tony Patterson of Orford, NH, Ronald Patterson and wife Merriel of Orford, NH, Chad Peavey and wife Virginia of Claremont, NH, Ty Peavey and wife Belinda of Enfield, NH, and Luke Bell of Orford, NH, six great-grandchildren Jocelyn & Jacoby Patterson, Kylie, Madison, Cooper, and Savannah Peavey; two brothers Herman Piper of Fairlee, VT and Arthur Piper of Texas, and several nieces and nephews. A graveside service will be held in the spring at the Highland Cemetery in Lyme, NH. Family and friends are invited to attend. Arrangements are by Hale Funeral Homes and Cremation Care of Bradford & Thetford, VT. Online guestbook at www.halefuneralhomes.com. To plant Memorial Trees in memory of Dolores "Dolly" W. Campbell, please click here to visit our Sympathy Store.

Born on January 24, 1929 in Chicago, IL, she was the daughter of William and Dorothy B. (Henry) Piper. At age 4, her family moved to Market Street in Lyme, NH where she resided most of her life. She was educated at Lyme Elementary School and... View Obituary & Service Information

The family of Dolores "Dolly" W. Campbell created this Life Tributes page to make it easy to share your memories.