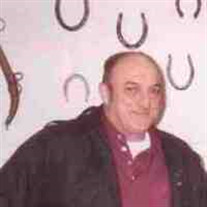 Warren, NH-Dominic Iovino, Jr., 76, of Warren died at his home on October 15, 2015 surrounded by his loved ones.He was born in Arlington, MA on April 29, 1939 the son of Domenic Iovino Sr. and Amalia "Lillian" Belladonna. He was married to Lisa Thurston on July 28, 2001 who survives.Dominic worked on the Iovino family poultry farm in his younger years. He carried that affection into his adult life and always loved to raise his own "Hen Fruit". He was a heavy equipment operator for many years. He also worked as a mechanic, pizza/sub shop part owner, and in his later years as an antique and collectibles shop owner and camp firewood.He was an avid hunter and fisherman, Dominic also hunted for and harvested oyster mushrooms for use in his special Italian Spaghetti and meatball dinners. He was a master chef and his biggest enjoyment was feeding his family and special neighbors his delicious creations.Dominic is survived by his wife Lisa, his children, Donna Randolph of Alexandria, NH., Dominic III and wife Barbara of Bristol, NH., Daniel and wife Tina of Billerica, MA., step-sons, Allen Thurston and wife Melissa of Bradford, VT and Andrew Hanley and partner Whitney Strickland of Warren, NH; many grandchildren, great-grandchildren, step-grandchildren, nieces and nephews. Eight sisters, Mary Kennard of Jacksonville, AR., Josephine Caporizzo and husband Al, Frances Falcione and Jean Iovino all of Bedford, MA., Violet Foster of Acton, MA., Esther Diluca of Reading, MA., Roth Benoit of Arlington, MA and Nadine Kostriza and husband John of Lexington, MA.He was predeceased by his parents, his ex-wife Donna Cassidy, their son, David, only brother, Pat, several brothers-in-law and one nephew.A celebration of his life will be held on Wednesday, October 28, 2015 at 11 am in the family lot in the West Bradford Cemetery in Bradford, VT. There are no calling hours.The Hale Funeral Homes and Cremation Care of Bradford, VT is in charge of arrangements.To view an online guestbook go to www.halefuneralhomes.com To plant Memorial Trees in memory of Dominic Iovino JR, please click here to visit our Sympathy Store.

Warren, NH-Dominic Iovino, Jr., 76, of Warren died at his home on October 15, 2015 surrounded by his loved ones.He was born in Arlington, MA on April 29, 1939 the son of Domenic Iovino Sr. and Amalia "Lillian" Belladonna. He was married to Lisa... View Obituary & Service Information

The family of Dominic Iovino JR created this Life Tributes page to make it easy to share your memories.

Send flowers to the Iovino family.