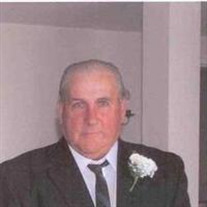 West Newbury, VT- Donald Dudley Carleton, 79, of West Newbury died Tuesday, March 24, 2015 at his home. He was born in West Newbury, VT on July 23, 1935 the son of Harold Arthur and Bertha (Gilmore) Carleton. He attended West Newbury Grade School and was a graduate of Newbury High School class of 1953. Donald had lived and farmed all of his life in West Newbury, VT. He was a member and State officer of the FFA, a member of the Grange, a member of the Friesian Holstein Association, enjoyed cattle shows and auctions, hunting and maple sugaring. He is survived by his wife Julia Phyllis (Frost) Carleton whom he married on July 22, 1967 , one son, Harold Leslie Carleton of West Newbury, VT and one daughter, Betsy Miceli and her husband Gary of West Newbury, VT; one grandson, Thomas Miceli and one sister, Margaret Drew of Bradford, VT; several nieces and nephews. Graveside funeral services will be held on Friday, May 8, 2015 at 11 am in the family lot in the West Newbury Cemetery. There are no calling hours. Donations in his memory may be made to the Visiting Nurse and Hospice of VT and NH, White River Jct., VT 05001. The Hale Funeral Homes and Cremation Care of Bradford, VT is in charge of arrangements. To view an online guestbook go to www.halefuneralhomes.com To plant Memorial Trees in memory of Donald Dudley Carleton, please click here to visit our Sympathy Store.

The family of Donald Dudley Carleton created this Life Tributes page to make it easy to share your memories.

Send flowers to the Carleton family.