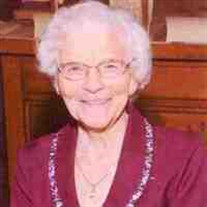 Bradford, VT- Doreen A. Clancy, 88, died at home on August 26, 2015 surrounded by her loving family.She was born January 23, 1927 in Boston, MA, the daughter of Frederick and Leila (Powers) Waters. She attended elementary schools in Melrose, MA and was a 1945 graduate of Melrose High School. Doreen attended Perry Normal School before receiving her Bachelor of Science degree in Education from Castleton State College, VT in 1949.From 1949 through 1956 Doreen taught school in Brattleboro, VT and also at schools in Swampscott, Upton and Stoneham, MA. Doreen married John Edward Clancy in 1956. They resided in Melrose where they raised five children. They retired to Bradford, VT in 1983. Doreen was a member of Our Lady of Perpetual Help Church in Bradford, and was an active participant in the Holy Family Society, and Church choir. She also was a regular performing artist at the Old Church Community Theater in Bradford.Her husband Eddie passed away in 2011 after 55 years of marriage. Doreen was also predeceased by her sister, Leah Goodhue, of Melrose, MA.Mrs. Clancy is survived by her three sons, Timothy of Hudson, NH, Daniel and wife Becky of Bradford, VT, David and wife Tammy of Lempster, NH, two daughters, Mary Spain of Naples, FL and Aileen MacDonnell and husband Harry of Leicester, MA; 15 grandchildren and seven great-grandchildren. She is also survived by her sister, Arlene Stanton of Melrose, MA, many nieces, nephews, great-nieces and great-nephews, and several cousins.A Mass of Christian Burial will be celebrated on September 1, 2015 at 12 pm at Our Lady of Perpetual Help Church, Upper Plain, Bradford, VT. There will be no calling hours. Burial will be private at the convenience of the family.Donations in Mrs. Clancy's memory may be made to Our Lady of Perpetual Help Church, Upper Plain, Bradford, VT 05033, or to VNA and Hospice of VT and NH.The Hale Funeral Homes and Cremation Care of Bradford, VT is in charge of arrangements.To view an online guestbook go to www.halefuneralhomes.com To plant Memorial Trees in memory of Doreen A Clancy, please click here to visit our Sympathy Store.

Bradford, VT- Doreen A. Clancy, 88, died at home on August 26, 2015 surrounded by her loving family.She was born January 23, 1927 in Boston, MA, the daughter of Frederick and Leila (Powers) Waters. She attended elementary schools in Melrose,... View Obituary & Service Information

The family of Doreen A Clancy created this Life Tributes page to make it easy to share your memories.

Send flowers to the Clancy family.