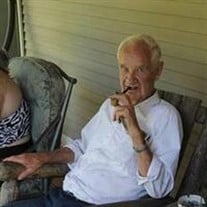 Thetford, VT - Duane "Joe" P. Cook Sr., 82, died unexpectedly Saturday, February 1, 2014 at his home. Joe was born on September 22, 1931 in Fayston, VT and was the son of Herbert and Vaun (Pierce) Cook. He attended Thetford schools and remained a resident of the town. He married Virginia M. Stanley in 1952 and they had five children. They were married for forty-nine years. Joe was the owner/operator of Joe's Rubbish Removal which doubled as a truck for hire business when farmers in the area needed sawdust or hay delivered. When he wasn't behind the steering wheel of one of his dump trucks, Joe was often "employed" helping out his friends and neighbors. He was a very visible and active member of the community. He enjoyed racing cars at Bear Ridge Speedway in Bradford, VT., family cookouts, horse shoes, cribbage tournaments, fishing, music, dancing, smoking apple tobacco in his corn-cob pipe, Search-A-Words,his beloved pets and was regarded as quite a math whiz by those that knew him well. He was a founding member of the Thetford Volunteer Fire Department and member of the Union Village Church. In recent years Joe was a fixture at the local stores and gas stations where he would drop by for scratch tickets and conversation. Many will remember him waving or calling out a greeting from his porch overlooking Academy Road and the Union Village Covered Bridge. Joe is survived by four sons, Duane S. Cook and wife Kathy of Fairlee, VT., Guy Cook and wife Martha of Corinth, VT., Gary L. Cook and wife Darlene of West Fairlee, VT and Douglas P. Cook and wife Kim of South Strafford, VT; one daughter, Barbara Jean Broderick and husband Chris of Lebanon, NH; eleven grandchildren; seven great-grandchildren; and one brother, Arvard Cook of CT. He was predeceased by three brothers, Bing, Clifford and Otis Cook and one sister, Elaice French. Visiting hours will be held on Saturday, February 8, 2014 from 2-4 pm at Hale Funeral Home & Cremation Care, Route 113, Thetford Center, VT. A Memorial Service will be held in the Spring at the Union Village Church with the Burial to follow immediately after at the Hillside Cemetery in Thetford, VT. In lieu of flowers donations in Duane "Joe" Cook's memory may be made to the Thetford Volunteer Fire Department, c/o Chad Whitcomb, Thetford, VT 05074. Hale Funeral Homes & Cremation Care of Thetford Center, VT is in charge of arrangements. To view an online guestbook go to www.halefuneralhomes.com. To plant Memorial Trees in memory of Duane P. Cook Sr, please click here to visit our Sympathy Store.

The family of Duane P. Cook Sr created this Life Tributes page to make it easy to share your memories.

Send flowers to the Cook family.