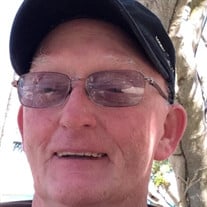 Dwight Richard Young passed away in his home at the age of 71, surrounded by his family on June 6, 2022 following a long illness. Dwight was born in Bradford, VT on January 29, 1951 on a snowy day on the way to the hospital. Dwight attended grade school in Cookeville and then went on to graduate from St. Johnsbury Trade School in 1970. On January 16, 1971, Dwight married Patricia Thurston, together they had two children, Shannon and Sonya Young. They divorced in 1996. Dwight was a member of the Corinth Volunteer Fire Department for many years. In his 41 years of employment Dwight worked for Goss Tire, Hebb Manufacturing, Upper Valley Press, Upper Valley Transport, Don’s Auto, Locke Excavation and Newmont Farm, along with running his own trucking business for several years. On June 6, 1998 Dwight married Jean Osgood. They started their life together in Piermont, NH and then moved to Bradford in 2013, where they lived their fairytale life together until his passing on the day of their 24th wedding anniversary. Dwight loved camping with his family. During camping trips and many fun afternoons and evenings you could find Dwight playing cards or dominoes with family and friends. He spent many days, nights, and weekends four wheeling, boating, snowmobiling and having a blast all while entertaining everyone! Dwight will always be remembered as the life of the party! Dwight was a huge car enthusiast, owning countless vehicles. Dwight would buy, sell or trade anything that had wheels. Dwight purchased his dream car, a Dodge Challenger, enjoying it immensely for a short period of time before his health declined. Dwight was predeceased by his father Wilbur Young, his step-father Edwin Dodge and his mother Dorothy Dodge. Survivors include his wife, Jean Young; his son Shannon Young & wife Brandi and their children Merrett, Meredith, Mallari, and Maleah; his daughter Sonya Grant & husband Jeremy and their children Cody and Kimberly; step daughter Jamie Sherman & husband Cody and her 4 children, Wayne Beede & fiance Kelsey Helm and their two children, Colton and Layne (aka Gerty) and Walker, Winnejean and Wyatt Beede; step daughter Jessica Locke & husband Nate and their children Samantha and Britney; his three sisters, Connie Thurston & husband Greg, Susan Hood & husband Donnie, and Diane Slack & husband Jon; many nieces and nephews and multiple friends. There will be a public service at Nate and Jessica Locke’s at 4210 Waits River Rd, Bradford, VT on Sunday, June 12th at 11:00am with a reception to follow. There will be no burial at this time. In lieu of flowers, please send donations to the Corinth Volunteer Fire Department or the VNA and Hospice of VT and NH Hale Funeral Home is honored to have assisted the family and taken Dwight into our care.

Dwight Richard Young passed away in his home at the age of 71, surrounded by his family on June 6, 2022 following a long illness. Dwight was born in Bradford, VT on January 29, 1951 on a snowy day on the way to the hospital. Dwight attended... View Obituary & Service Information

The family of Dwight Richard Young created this Life Tributes page to make it easy to share your memories.

Dwight Richard Young passed away in his home at the age of 71,...