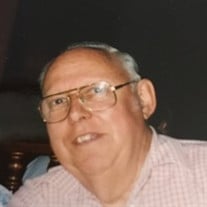 Edward C. Claflin of Whitherspoon Road, East Ryegate Corners, VT., passed away peacefully surrounded by his family at the Jack Byrne Center for Palliative Care at the Dartmouth Hitchcock Center in Lebanon, NH. at the age pf 87 on Sunday, March 4, 2018Edward was born November 24, 1930 in Medford, MA. He was predeceased by his parents, A. Charles Claflin and Ruth M. (Brownlee) Claflin and his sister Evelyn (Claflin) Jepson.Edward grew up in Saugus Ma. He served in the US Army during the Korean War. On June 16, 1984 he married Gwendolyn (Eastman) Smith and moved to East Ryegate, Vt. in November 1994.Edward was a member of the NRA and enjoyed hunting, fishing, gardening, his camp in Corinth Vt. and spending time with his family.Besides his loving wife Gwendolyn of 33 years, he leaves his stepchildren; Karl Smith of No. Haverhill, NH., Lois Testut and husband Michael of Island Pond, VT., Richard Smith and wife Sherri of Newbury, VT., Linda Carbee and husband Peter of Groton, VT., and Robert Smith and wife Lisa of Waits River, VT., Grandchildren; Carla, Karen, Chris, Heather, Meagan, Jesse, Amanda, Nathaniel, Jolene, Matthew, Ian,Kelsey, Jennifer and Josh; and 25 great grandchildren, his loving cat Mickey and many cousins, nephews and a niece.Funeral Services will be held on Saturday, March 10, 2018 at 11:00 a.m. at the Groton Methodist Church.A spring burial will be at the West Topsham Cemetery.Our heartfelt thanks goes out to the loving support and care that the nursing staff at the Jack Byrne Center provided Edward and our family during this difficult time. To plant Memorial Trees in memory of Edward C. Claflin, please click here to visit our Sympathy Store.

The family of Edward C. Claflin created this Life Tributes page to make it easy to share your memories.

Send flowers to the Claflin family.