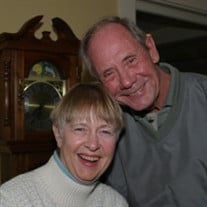 Peterborough, NH-Edwin Herbert (Bert) Hylander, 90, died peacefully April 15, 2020 at RiverMead in Peterborough, NH after a long illness. He was the son of Edwin H. Hylander and Ellen (Nelson) Hylander. Bert is survived by his wife, Joan (Weaver) Hylander.Born in Brooklyn, NY on December 26, 1929, Bert grew up in Garden City, Long Island, NY.He attended Colgate University and graduated from Hofstra University with a degree in business. Following graduation, Bert served three years in the US Army, two of them in Germany in the Army Security Agency. After his discharge, he worked for General Motors as a claim's adjuster. He later joined the Western Electric Company in New Jersey, filling many different management positions, largely in finance in New York, Minneapolis, and Morristown, NJ. During his years with the Bell System, he and Joan lived in Westfield, NJ where he was active in community affairs.Retiring from corporate life in 1987, he and Joan moved to Seabrook Island, SC to pursue his dream of being a low handicap golfer. At Seabrook he served on the Board of Governors helping oversee the renovation of the Crooked Oaks Golf Course.In 2013, the Hylander's returned to New England to be nearer to their family and summer home on Lake Morey in Fairlee, VT. When not on the golf course, Bert was an avid gardener and loved spending time with family and friends. He served on the board of the Lake Morey Protective Association and during that time introduced the Adopt-A-Lake program to manage the control of Eurasian Milfoil in the lake.Bert is survived by his wife, Joan Hylander, of Peterborough, NH, three children, David Hylander and his wife, Helene of Hillsborough, NJ, Wendy Ozimek and her husband, Jim of Chadds Ford, PA, and Peter Hylander and his wife, Maureen of Crested Butte, CO, three grandchildren, Dana, Alexis and Mark Ozimek, and four great-grandchildren.Funeral services will be held in Fairlee, VT this summer. Memorial contributions may be made to the Lake Morey Foundation, PO Box 234, Fairlee, VT 05045, or, to the Peterborough Food Pantry, 1 Grove Street, Peterborough, NH 03458. Arrangements are by Hale Funeral Home in Bradford, VT. To plant Memorial Trees in memory of Edwin Herbert Hylander, please click here to visit our Sympathy Store.

The family of Edwin Herbert Hylander created this Life Tributes page to make it easy to share your memories.

Send flowers to the Hylander family.