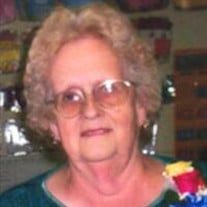 Waits River, VT-Eleanor M. Gendron, 83 of Waits River died peacefully surrounded by her family Sunday, October 13, 2019 at the Blue Spruce Home for the Retired in Bradford, VT.She was born June 2, 1936 in East Corinth, VT the daughter of Stanley Oliver and Dorothy (King) Oliver. On March 9, 1957 she married William Gendron in Bradford, VT. Mr. Gendron died in 2002.She attended East Corinth schools and was a graduate of Bradford Academy. She had been employed at Sprague Electric in Barre, VT, Channel Mills in Bradford, VT, Unifirst in Williamstown, VT, Maska USA in Bradford, and had been a driver for the Stagecoach.Eleanor was a member of the American Legion Post #20 Auxiliary in Bradford, the New Hope United Methodist Church, the Oxbee Quilt Guild, and was a volunteer in the library at Waits River Valley School. She was an excellent seamstress knitting sweaters and many other items for family and friends. She was well-known for baking cakes, pies and donuts, and was a regular baker and cook for church suppers.Survivors include two sons, Bruce Gendron of Topsham, VT and Michel (Shanin) Gendron of Newbury, VT, two daughters, Maureen (Stephen) Otterman of West Topsham, VT and Mary Gendron of Topsham, VT, 5 grandchildren, 5 great-grandchildren, two sisters, Jean Sulham of Ascutney, VT and Agnes Renfrew of Bradford, VT, a brother-in-law, Antoine "Tiny" Gendron of West Fairlee, VT and two sisters-in-law, Shirley Gendron of Orford, NH and Connie Gendron of Lebanon, NH. Eleanor was thought of as a "mother and grandmother" to many others in the surrounding communities.She was predeceased by a sister, Shirley Sickels, three brothers-in-law, Wilfred "Pete" Gendron, Leon Gendron and Bernard Gendron, and a sister-in-law, Bernice Piper.Funeral services will be held Monday, October 21, 2019 at 11am in the New Hope United Methodist Church in Waits River, VT. In lieu of flowers, donations in her memory may be made to the New Hope United Methodist Church, PO Box 33, West Topsham, VT 05086. Arrangements are by Hale Funeral Home of Bradford, VT. To plant Memorial Trees in memory of Eleanor M. Gendron, please click here to visit our Sympathy Store.

The family of Eleanor M. Gendron created this Life Tributes page to make it easy to share your memories.

Send flowers to the Gendron family.