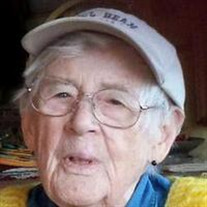 Thetford, VT-Emma Senger, a resident of Thetford, died quietly on March 22 at the age of 103. Emma was born September 6, 1910, in Berlin, Germany, the second of six children of Helene and Wilhelm Heuse. In 1933 she married Felix Senger, whom she had met while they were both studying art. They settled in Berlin and had three children, Maria Bildau, Christiane, and Matthias. After the war, Emma & Felix immigrated to the United States; Emma and her young son came first in 1956. Rather than pursuing her career as a portrait artist, which would have entailed considerable travel, she worked as housekeeper for the family of Thomas Margetts in New Vernon, NJ, until her husband was able to join them a few years later. Those first years provided an experience she always considered as an excellent introduction to American culture.In 1959, the Sengers moved to Milwaukee, Wisconsin, where they were joined by Chris, who had also emigrated to the U.S. Felix and Emma, working as an artistic team, formed Felix Senger Studio specializing in liturgical art, including stained glass windows, mosaics, and icon paintings. Their creations were installed in churches and other buildings throughout the Midwest, New York, and New Jersey. Emma also developed a unique form of appliqued wall hangings that drew on their glass window style.In 1993 Emma and Felix moved to Thetford to be near Chris. For many years, Emma continued to be quite active and enjoyed living in the Upper Valley. She enjoyed the sheep in her field, learned to spin and dye wool, taught herself weaving, and created a variety of artistic items. In later years, she enjoyed her daily walk with her Cardigan Corgi dog and sitting at dusk looking down the small valley toward Union Village and the tower lights in Lebanon. Many times in the last 20 years, she said, "I'm so glad we immigrated to America and then came to the Upper Valley."Felix, her husband of 60 years, died in 1994 and her daughter Maria died in 1998. She is survived by the youngest of her siblings, Dr. Otto Heuse of Kronberg Germany; her daughter and son, both of Thetford; two grandchildren, Martin Bildau of Berlin, Germany, and Irene Bildau of Munich, Germany, and 4 great-grandchildrena"all of whom visited often. A memorial service will be held in late May.The Hale Funeral Home and Cremation Care of Thetford Center, VT is in charge of arrangements.To view an online guestbook go to www.halefuneralhomes.com To plant Memorial Trees in memory of Emma Senger, please click here to visit our Sympathy Store.

Thetford, VT-Emma Senger, a resident of Thetford, died quietly on March 22 at the age of 103. Emma was born September 6, 1910, in Berlin, Germany, the second of six children of Helene and Wilhelm Heuse. In 1933 she married Felix Senger, whom... View Obituary & Service Information

The family of Emma Senger created this Life Tributes page to make it easy to share your memories.

Send flowers to the Senger family.