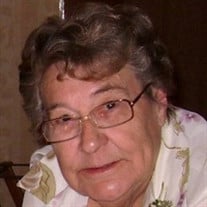 Fairlee, VTEunice Mary (Dailey) Edmands of 910 Rte 5 South passed away Tuesday, July 4, 2017 at Cottage Hospital in Woodsville, NH following a courageous battle with COPD.Born on February 13, 1935 in Calais, VT, she was the daughter of Arthur E. and Luna M. (Dunham) Dailey. Eunice grew up on the family farm in Calais until the 9th grade when her family moved to Thetford, VT. She was a 1953 graduate of Thetford Academy and then attended Lyndon Teacher's College for a term.On June 6, 1954, she married Robert Stanley Edmands and they made their home in Fairlee where they farmed until the early 1970's. In addition to helping on the farm, she worked as a waitress at the Fairlee Diner for over 25 years. In later years, she was a home day care provider for many children of the area.She was known for baking--especially whoopie pies, cookies, and her chocolate mayonnaise cake; her large vegetable garden and for canning vegetables and jarring pickles. She will be remembered as being very social-- loving to entertain friends and family and to go dancing. She enjoyed yard saling and finding a good bargain, playing bingo and gaming, and was an avid Red Sox Fan. But most of all, she loved mothering her children, grandchildren, and great-grandchildren, as well as any other children that crossed her path.She was a longtime member of the Fairlee Community Church.Besides her parents, she is pre-deceased by a son Robert A. Edmands, an infant daughter Sharon Edmands, a brother Frank Dailey and a sister Doris Hodge.She leaves her loving husband of 63 years Robert S. Edmands of Fairlee; two daughters: Debra Edmands of Fairlee and Brenda Edmands (Michael Lancaster) of Westbrook, ME; two sons: Stanley Edmands (Cathy Keller-Edmands) of Ravenel, SC and Richard Slocum of Burlington, VT; a daughter-in-law, Laura Edmands of Hudson, NH; a son in her heart John Clough of Bradford, VT; grandchildren: Jason Clough (Dara) of North Kingston, RI, Jennifer Fromme (Tim) of Cromwell, CT, Christopher Edmands (Amy Delescluse) of Hudson, NH, Matthew Edmands of Hudson, NH and Toren Elsen of Baltimore, MD; Great-Grandchildren: Leah Delescluse, Isabelle Fromme, Camdyn Clough, Logan Edmands, Ava Fromme, and Hayden Clough; a brother Eugene Dailey (Anna) of Holderness, NH; many nieces & nephews; and cousins Virginia Boudoin of Laconia, NH, Regina Neufield of Cambridge, VT, and Linda Dailey.A Celebration of Life Service will be held at 2:00pm Saturday, July 8 at Fairlee Community Church in Fairlee, VT with a reception to follow in the fellowship hall. Following the reception, burial will be private for family at Fairlee Village Cemetery. Since purple was Eunice's favorite color, everyone is encouraged to wear the color purple to the service.In lieu of flowers, memorial donations may be made to St. Jude's Children's Research Hospital, 262 Danny Thomas Place, Memphis, TN 38105 or to the children's charity of your choice.Online guestbook at www.halefuneralhomes.com.Arrangements are by Hale Funeral Homes & Cremation Care of Bradford & Thetford, VT. To plant Memorial Trees in memory of Eunice Mary Edmands, please click here to visit our Sympathy Store.

Fairlee, VTEunice Mary (Dailey) Edmands of 910 Rte 5 South passed away Tuesday, July 4, 2017 at Cottage Hospital in Woodsville, NH following a courageous battle with COPD.Born on February 13, 1935 in Calais, VT, she was the daughter of Arthur... View Obituary & Service Information

The family of Eunice Mary Edmands created this Life Tributes page to make it easy to share your memories.

Send flowers to the Edmands family.