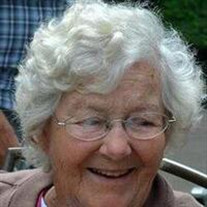 Frances Putnam Hyde of Bradford, VT, died November 6 at Cottage Hospital in Woodsville, NH following a short illness. She was born September 9, 1924 at home on the family farm in Bethel, VT, the daughter of Frank and Jessie Archibald Putnam. Fran was the first of four girls. She attended the local grade school and graduated from Whitcomb High School in 1942. After graduating from high school, she worked for a time in a local store and then went to work in the local bank for a couple of years. Having an interest in writing, she applied to Boston University and was accepted with a small scholarship. Working in the college dining room during the school year and working summers at a job in Maine, she was able to complete her college education. Fran graduated from the College of Journalism in 1949. Following graduation, Fran worked at the Randolph Herald for several years. John Drysdale, the publisher of the Randolph Herald also owned the Bradford Journal Opinion paper at that time and when the news editor left to work for a daily paper, he offered Fran the job; she accepted and moved to Bradford. Fran was active in her local church and a Girl Scout troop leader. She was a long-time member of the Eastern Star starting in 1949 in Chelsea, Vermont. In 1962, Fran left her job with the Bradford paper and married Arthur Hyde, a local farmer and long-time family friend. She continued writing a column for the Bradford paper for a number of years. Fran quickly became a "farmer's wife". She could often be seen driving the farm truck, hauling grass or corn with the family dog sitting beside her. She would perform most any task around the farm other than milking cows. Arthur and Fran traveled extensively throughout the United States, camping in every state except Hawaii. In later years, after retiring from farming, they continued traveling, expanding their travels throughout the world. Fran is survived by son Bruce Hyde and wife Karen of Bradford; daughter SallyAnn Carson and husband Kenneth of Mosheim, Tenn.; daughter Rebecca Gardner of Conway, NH; a sister Margaret Wesley and husband John of Middlebury; a sister Loraine Putnam of Bethel, VT; grandchildren, June Pilcher and husband Stan, Dean Hyde, Brian Carson and wife Erin, Jamie Hyde and his partner Bess D'Amico, Kristin Donnelly and husband Todd, great grandchildren, Courtney Benway and her partner Johnny Romero, Benjamin Carson, Katrina Gadue; and two great-great grandchildren, Aryanna and McKaylee Romero; and several nieces and nephews. Fran was predeceased by her parents, her husband Arthur, and sister Louise, a twin to Loraine. Funeral services will be held on Saturday, November 15, 2014 at 1 PM in the Bradford United Church of Christ in Bradford, VT. There are no calling hours. Burial will be private. In lieu of flowers, donations in Fran's memory may be made to the Bradford Cemetery Association, PO Box 339, Bradford, VT 05033. The Hale Funeral Home of Bradford is in charge of arrangements. To view an online guest book, go to www.halefuneralhomes.com. To plant Memorial Trees in memory of Frances Putnam Hyde, please click here to visit our Sympathy Store.

Frances Putnam Hyde of Bradford, VT, died November 6 at Cottage Hospital in Woodsville, NH following a short illness. She was born September 9, 1924 at home on the family farm in Bethel, VT, the daughter of Frank and Jessie Archibald Putnam.... View Obituary & Service Information

The family of Frances Putnam Hyde created this Life Tributes page to make it easy to share your memories.

Send flowers to the Hyde family.