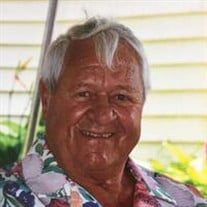 Piermont, NH-Freeman Ellis Robie, 94, of Rte. 10 died August 7, 2019 at the home farm in Piermont where he was born, had farmed with his wife, Winona and raised their family of four sons, Terry, Lyman (Lee), Timothy and Todd.He was born January 13, 1925 to Lyman Edward Robie and Gwendolene Diana (Shumway) Robie. He attended Piermont schools and was a graduate of Bradford Academy in Bradford, VT. Mr. Robie married Winona Joyce Emerson on June 30, 1945 and they celebrated 71 years together. They began married life together in Conway, NH where he was employed by Shumway Marshall delivering bottled milk. In 1946 they moved back to Piermont where Freeman began a job as herdsman for Stephen Underhill.In 1952 they purchased the Robie family farm in Route 10 in Piermont from his father but told his Dad he didn't want the horses. He was getting a tractor! He built up an impressive herd of registered Holsteins that won many awards and were sold around the United State and exported to other countries. He had served as president of the Holstein Friesian Association. He often said he never wanted to be anything but a farmer, and he liked to work. He was a special mentor to Steve Russo in teaching him how to farm. No matter how hard he worked, he and Nonie always found time to socialize and go to dances on Saturday night.After their barn burned in 1976, Freeman and Nonie traveled much of the United States and wintered in Florida. They enjoyed playing golf and socializing with a close community of friends. He was Bradford (VT) Golf Club's Senior Champion three years in a row from 1998-2000.Survivors include three sons, Terry Robie and his wife, Cheryl, Lee Robie and his wife, Betty Sue, all of Piermont, NH, and Todd Robie of Thetford, VT, grandchildren and great-grandchildren who always brought a smile to his face, a brother, Paul Robie of Florida, and a host of friends and extended family. He was predeceased by his wife, Winona, a son, Timothy, and grandsons, C. Freeman Robie and Alan Timothy Robie, a brother, Keith Robie, and a sister, Lurlene (Robie) McLam.A Celebration of Freeman's Life will be held at the Piermont Church Vestry on August 25, 2019 at 4pm, with graveside services preceding it at 3pm in South Lawn Cemetery, Rte. 10, Piermont, NH. Arrangements are by Hale Funeral Home of Bradford, VT. To plant Memorial Trees in memory of Freeman Robie, please click here to visit our Sympathy Store.

Piermont, NH-Freeman Ellis Robie, 94, of Rte. 10 died August 7, 2019 at the home farm in Piermont where he was born, had farmed with his wife, Winona and raised their family of four sons, Terry, Lyman (Lee), Timothy and Todd.He was born January... View Obituary & Service Information

The family of Freeman Robie created this Life Tributes page to make it easy to share your memories.

Send flowers to the Robie family.