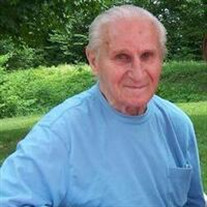 Wilder, Vt. a" George G. Gyorky, known as "GAC.za" to family, passed away August 14, 2014 peacefully surrounded by those who loved him at Brookside Nursing Home in Wilder, Vt. He was born in BAC.kAC.scsaba, Hungary on Feb. 11, 1916, to JA¡nos Gyorky and Zsofia Sztodola, and had six siblings who predeceased him. His father died after WWI followed by his mother 10 years later, when George was 15 years old. After high school, he left southern Hungary and went to Budapest in 1931. During tough economic times between the great wars in Europe, he became an apprentice to a grocery shop keeper where he lived and worked for many years, a job that suited him because he loved to engage and tell jokes and stories. He met his wife Elizabeth in Budapest, in his store, and they fell in love and married in February 1943, making their home in Budapest. Living conditions were difficult during WWII, but George and Elizabeth made due with two children, GAC.za Miklos and Agnes, risking their lives to help their Jewish friends evade capture and deportation to concentration camps in Poland. Some years later their courage took them away from their beloved homeland when they escaped to Austria during the Hungarian Revolution in October of 1956. They became part of an exodus of two hundred thousand from Hungary, eventually arriving in Boston, Mass. in 1957 to make a new home for themselves. George and Elizabeth adopted their new country and were proud Americans, grateful for new opportunities. George was a loving and generous man, someone whose humility shaped his life. He was always grateful and kind, quick to say thank you and show appreciation for any kindness shown to him, even in his dying moments. He was fascinated by numbers and could compute a long list of numbers in his head faster than a calculator. He lived 35,954.5 days. He was blessed by a long, loving life always surrounded by his family. We will miss his funny jokes and stories and laughter. He was predeceased by three sons, GAC.za Miklos, GAC.za and LA¡szlA; and his wife of 61 years, Elizabeth (TakA¡cs) Gyorky. He leaves behind daughters, Agnes Burnes and her husband, David Burnes, of Boston, and Susan Gyorky and her husband, Robert O'Leary, of Fairlee, Vt.; and nine grandchildren, Nicholas and Jackson Burnes, of Boston, Cynthia Hinds-Ortiz, of NYC, John and Steven Doherty, of Florida, Ryan, Jeremy, Sierra and Sofia O'Leary, of Fairlee. He was a wonderful husband and father and the best grandfather to his grandchildren, the epitome of the loving granddad giving too many candies to the little ones who just loved to be with him. Funeral arrangements provided by Hale Funeral Home and Cremation Care in Bradford, Vt. Memorial service will be announced for a future date. The Hale Funeral Home website has an online memorial guestbook for you to sign at www.halefuneralhomes.com To plant Memorial Trees in memory of George G. Gyorky, please click here to visit our Sympathy Store.

Wilder, Vt. a" George G. Gyorky, known as "GAC.za" to family, passed away August 14, 2014 peacefully surrounded by those who loved him at Brookside Nursing Home in Wilder, Vt. He was born in BAC.kAC.scsaba, Hungary on Feb. 11, 1916, to JA¡nos... View Obituary & Service Information

The family of George G. Gyorky created this Life Tributes page to make it easy to share your memories.

Send flowers to the Gyorky family.