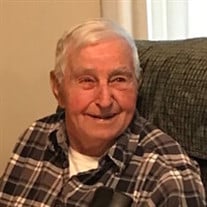 ORFORD, NH -- Gerald Edwin Pease, 87, died Saturday, March 9, 2019 at Hanover Terrace following a brief illness. Gerald was born November 1, 1931, the second son of the late Glenn F. and Theda (Howard) Pease. He graduated from Orford High School in 1950 and lived his whole life in East Orford. Following graduation, he joined his father Glenn and worked side-by-side with him at the family dairy farm until 1971.In November 1951 Gerald married Doris Quackenbush and together they raised their 5 children, Harrison (Harry), Gene, Carol, Janet and Sheryl, in the old Davistown School House in East Orford that they purchased and renovated. In 1972 Gerald married Rita Antoinette (Toni) Carter of Brentwood, NH. Toni moved to East Orford with her 4 children, Kellie, Richard, Sallie and James. Together they raised Toni's 4 children in East Orford. In addition to spending time with family and friends Gerald and Toni enjoyed traveling, which included trips to Germany, Austria, Alaska, New York, Pennsylvania, North Carolina, Nebraska, Texas, and Colorado. They were married for 46 years.In 1971 Gerald left the family farm and started a second career as a carpenter and was well known throughout the Upper Valley for his skill and work ethic. Throughout his life, Gerald was never happier than when he was working with a pair of draft horses. Whether logging or sugaring or haying, he thought that a good pair of draft horses was the best "horse" power there was. Second best was the 1943 International Farmall H tractor which he loved to drive.Gerald was a great neighbor and public servant. He was always there to help whenever anyone was in need. He was one of the early members of the Orford Volunteer Fire Department and helped build Orford's first fire station in 1964. He served as Orford's Forest Fire Warden for over 50 years, and served as a Selectman. He was also an early member of the Parks and Playgrounds Committee helping to maintain the Town beaches and build picnic tables.Gerald was predeceased by his sister Irene in 1956 and his brother Howard in 2017. He is survived by 2 brothers, Francis of Orford and Arthur of Lebanon. In addition to many friends and extended family, Gerald will be greatly missed by his children Harry and his wife Linda of Orford, Gene of Piermont, Carol and her partner Su of Thornton, NH, Janet and her husband Paul of South Strafford, VT, and Sheryl and her husband John of Etna, NH, as well as by his step-children Kellie and her husband Lyle of Orford, Richard of Warren, NH, Sallie and her partner Danny of Manor, TX, and James and his wife Roberta of Orford, and his wife Toni and his 11 grandchildren and 21 great-grandchildren.The family requests that donations in Gerald's memory be made to the Orford Fire Department Association, 476 NH Route 10, Orford, NH 03777 or the Orford Historical Society, P.O. Box 44, Orford, NH 03777.A memorial service will be held at the United Congregational Church of Orford, NH Route 10, Orford NH at 11:00 a.m. on Saturday, March 16, 2019. The Hale Funeral Home of Bradford is in charge of arrangements. Online guestbook at www.halefuneralhomes.com. To plant Memorial Trees in memory of Gerald Edwin Pease, please click here to visit our Sympathy Store.

The family of Gerald Edwin Pease created this Life Tributes page to make it easy to share your memories.

Send flowers to the Pease family.