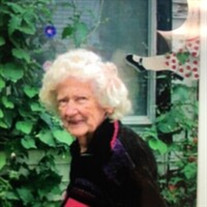 Topsham, VTGertrude Martha (Darrow) Hodge, 99, of Topsham went to see her Lord and Savior on Friday, April 20, 2018 at Central Vermont Hospital.She was born in Rural Grove, New York on April 20, 1919, the daughter of William and Susan (Francis) Darrow.She attended schools in Ames, New York, graduated from Canajoharie High School, and Nyack Missionary Institute in 1939.On April 20, 1940, Gertrude married George R. Hodge of East Topsham and made her home in Topsham until her passing.She was employed by the State of Vermont Department of Public Safety working in Civil Defense for 20 years as the sole female training officer. After her retirement from the State, she was a disaster reservist with FEMA and appointed by the President to the Executive Reserve. She was a lay minister for the Methodist Church for 60 years. In her later years, her interest in antiques, collectables, and whatever grew. She was the owner and operator of "Hodge Podge". Buying and selling at flea markets, auctions, East Barre Antique Mall, Colonial Plaza, and where ever she could park her car.Gertrude had a strong commitment to volunteerism. She served on a multitude of Boards, received many awards, and held offices at the State and National Level.She was the women's chairperson of the Vermont Farm Bureau, State President of PTA, and served on the National PTA Board, Legislative Specialist for AARP, Health Chairperson for AARP, receiving the prestigious Andrus Award, President of Vermont Gideon auxiliary as well as all offices at the local level, President of the VT/NH Gideon Auxiliary, President of the United Presbyterian Women of Vermont, President of Central Vermont area on aging; Some of the Boards which she sat on were the Cove Board, the Northeast Health Care Quality Foundation Board, State Dental Board, State Funeral Board, Northeast Board of Dental Examiners, and Vermont Information Technology Leaders.Gertrude valued her religion, family, and education. Her emphasis was always on do your best. She had a positive attitude and enjoyed the journey of life, rather than focus on the destination. She loved and lived life to the fullest. Her philosophy was that everyday was god's gift to you so use it wisely, enjoy it, learn something new everyday, and eat dessert first. "When asked the question how would you like to be remembered? "Her answer was "Being a good mother, Served my State and the people, Not having wasted my life, Never had a job which I didn't like, Never been unhappy."Her parents William and Susan Darrow pre-deceased her. Also her husband of 58 years, George R. Hodge died on August 19, 1999.Survivors include her two sons of Topsham: William Hodge and companion Linda Welch, Paul Hodge and wife Wendy (Goodwin) Hodge. Her three daughters: Georgiana Spooner and husband James of West Topsham, Martha Emerson of East Corinth, and Cynthia Gauthier and companion Max Galvin of Montpelier. 13 Grandchildren: William Hodge, II, Gregory Hodge, Bradley Hodge, Paul Hodge, II, Kathryn (Hodge) Epper, Michael Emerson, Mark Emerson, Melvin Emerson, Martin Emerson, Christopher Spooner, Nicholas Spooner, Alison Gauthier, and Sarah Gauthier; 18 Great-Grandchildren, 5 Great-Great Grandchildren, and a multitude of friends.Calling hours will be held from 6:00pm to 8:00pm Friday, June 1 at Hale Funeral Home, 187 Upper Plain, Bradford, VT. A Memorial Service will be held at the East Topsham Presbyterian Church on Saturday, June 2 at 1pm, with the Rev. Virginia Collins, officiating. Burial will be in the Fairlee Cemetery.Memorial contributions may be made in memory of Gertrude Hodge to Gideon International, PO BOX 328, Barre, VT 05641.The Hale Funeral Home in Bradford is in charge of arrangements.To visit online guestbook, visit www.halefuneralhomes.com. To plant Memorial Trees in memory of Gertrude Martha (Darrow) Hodge, please click here to visit our Sympathy Store.

The family of Gertrude Martha (Darrow) Hodge created this Life Tributes page to make it easy to share your memories.