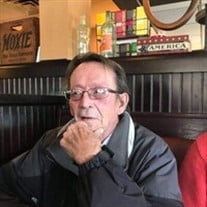 Harold Edwin Osmer Sr. passed away October 18th, 2021 at Frances Atkinson Residence For The Retired Home in Newbury, VT surrounded by his loving family. Harold was one of six children, born to Harold and Edith Osmer in Chelsea, VT on March 24, 1943. Harold grew up up in West Topsham, Vt. Where he attended grade school and graduated from Bradford Academy, Class of 1961. He worked at the Bradford Veneer Mill, Rock of Ages and Rouleau Granite Sheds until his retirement. Harold met the love of his life Rose Colbeth and together they built a home on Pike Hill in Waits River, Vermont raising their two children Annette and Harold Jr. They enjoyed 49 years together until her passing in 2017 Harold enjoyed playing horseshoes, dancing, listening to country music, gardening, barbering and talking with everyone who came into the Waits River Store and Gramps Country Store. With a cigarette in one hand and a beer in the other, Harold, also known as, Biam, Ozzie Beagle, or Spike, will always be remembered as the Icon of the Village. Harold leaves behind his daughter Annette Wilson and Gregg Barney, East Barre, VT and his son Harold Jr. and Lura Osmer, Northfield, VT. His brother John and Dora Osmer, Arlington, MA, Henry Osmer, Hill, NH, Harry and Bonnie Osmer, Orford, NH, sisters Swanee and Grant Gibby, West Topsham, VT and Ruth and Bruce Limlaw, West Topsham, VT. Grandchildren Hayley Wilson, Jordan Osmer and fiancé Desirae Bashaw, Rebecca, and Hannah Osmer. Great-grandchildren Brookleigh and Jarrett Osmer. He also leaves behind many nieces and nephews. Services will be held at Waits River, VT cemetery October 30th, 2021, at 1pm with a gathering at the New Hope United Methodist Church, Waits River, VT following the service. In lieu of flowers donations in his memory may be made to the Frances Atkinson Residence for The Retired, 4717 Main St South, Newbury, VT 05051. The family wishes to thank all the caregivers at the Francis Atkinson Home for the wonderful care Harold received there. Hale Funeral Home in Bradford is honored to be entrusted with Harold’s Care.     To plant Memorial Trees in memory of Harold Edwin Osmer, please click here to visit our Sympathy Store.

Harold Edwin Osmer Sr. passed away October 18th, 2021 at Frances Atkinson Residence For The Retired Home in Newbury, VT surrounded by his loving family. Harold was one of six children, born to Harold and Edith Osmer in Chelsea, VT on March 24,... View Obituary & Service Information

The family of Harold Edwin Osmer created this Life Tributes page to make it easy to share your memories.

Send flowers to the Osmer family.