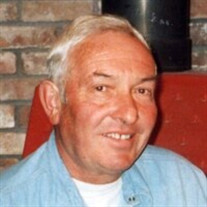 Orford, NH- Harvey Horton Washburn passed peacefully on Tuesday, July 19, 2016. He was born on June 2, 1937 in Hanover, NH to Bernice Horton Washburn and Harvey Lovejoy Washburn. Horton graduated from Orford High School with perfect attendance in 1955. That fall, he went to work at the E.T. and H.K. Ide's Feed Company in Fairlee, Vermont. Horton also farmed with his father. After working at Ides for three years, he went to work for Deary Brothers Creamery in Bradford, Vermont where Horton picked up canned milk as well as working in the plant. He moved on to work for Bay State Ice Cream in Chelsea, VT. He drove tractor-trailer delivering milk, cream and manufactured product all over New England. Horton worked there over eight years until the plant closed down. He then went to work for Hayward Transportation in Fairlee, VT for sixteen years hauling milk, sand, gravel, lumber and steel. All the time Horton was working, with the help from his family, he kept his farm running, raising beef cattle and heifers, along with selling grazed hay. Horton always had a love for the woods and after being on the road for some twenty years, he decided on a career change. He bought a John Deere Dozer, chain saws and all of the good stuff that went with logging at the time and went to work for himself. After a couple of years, Horton hired one and then two men and bought two skidders and worked on various lots, cutting logs, paper wood and firewood. All this time, he was also building up a firewood business. At its peak, Horton had over 200 customers and produced over 400 cords of wood per year. All of this work was done with chainsaws and wood splitters with no processors. After many years of hard work, Horton's health began to decline. He had to have open-heart surgery. After recovering, he continued his firewood business, but back and hip problems arose and he had to give it all up. He helped K&R portable toilets for a few years and then retired. Horton always had a love for John Deere equipment, especially his tractors which he recently restored, a 1950 MT his father had purchased for him and a 1962 1010. Horton was very involved in the Orford community. He was president of the Mount Cube Rod and Gun Club and was a supporter of the Upper Baker Picnic Area. Horton was also a deacon of the Orfordville Church for many years. He served as selectman for nine years and worked on the planning commission for twelve. Horton was a fence viewer for over 30 years and served on many other community projects. He was a Mason and belonged to Mount Cube Lodge #10 F. & A.M. for over fifty years. In retirement, Horton enjoyed reading the Valley News, Journal Opinion and many farm and forestry magazines. In the papers, he enjoyed reading about high school sports. Horton enjoyed watching the Red Sox, Celtics and Patriots along with Nascar. He loved and spent hours watching wildlife and feeding trout in his man made pond. Horton loved nothing more than his children, extended family and friends. Horton is survived by his wife Geraldine "Jerry"and five children: Neil and wife Barbara and two sons Nicholas and Kyle, Shawn and his wife Juli and son Casey, Sharyn and fiancé Bert Ball and daughter Laura Jeanne, Rodney Estes and wife Tamara and children Amy and Jim, Tammy Piper and two daughters Miranda and Samantha, and a sister Joyce Flint. Horton was predeceased by his parents and three sisters: Jeanne Chase, Lucille Brooks and Laura Verry. He was also predeceased by his son-in-law James Piper. Memorial services will be held at the Orfordville Congregational Church on Monday, July 25, 2016 at 11:00 am. Burial will follow in the family lot at the Orford Main Street Cemetery. A Reception will follow at the Orford Congregational Church. The Hale Funeral Homes and Cremation Care of Bradford, Vt is in charge of arrangements. To view an online guest book go to www.halefuneralhomes.com To plant Memorial Trees in memory of Harvey Horton Washburn, please click here to visit our Sympathy Store.

The family of Harvey Horton Washburn created this Life Tributes page to make it easy to share your memories.

Send flowers to the Washburn family.