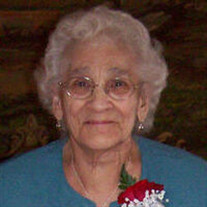 Topsham, Vermont -Helen Mary Frost died Friday, April 25, 2014 at her home in Topsham.She was born in Lancaster, NH on February 2, 1919, the daughter of Howard and Mary (Knoe) Brooks.At a young age she went to live with Carrie Thurston in West Topsham where she attended school. Upon completion of her education, she moved to East Topsham to care for Rosamond Frost.On February 22, 1938 she married Renwick Frost at the Waits River, Vt. Parsonage. They lived the next 55 years on the Frost Farm in Topsham. He died July 25, 1993 in the same room Helen did.She worked at Miller's Store in Topsham for 38 years. No one will forget Freddie yelling "Helen" numerous times a day. She also assisted him in the Post Office which was in the store then.In her younger years she was active in the Topsham Mother's Club, the Grange and the PTA in which she held many different offices.She was a life time member of the Topsham United Presbyterian Church which she attended as long as her health permitted. She sang in the choir, was active in the Women's Missionary Society, and served as an ordained Elder and Church Treasurer.Helen loved to do hand crafts knitting mittens and hats for all her grandchildren when they were young. She enjoyed crocheting Afghans and doilies, but her greatest love was making patchwork quilts which were all hand stitched.She loved a good game of cards, country music and spending time with her family and friends at OSIP.She is survived by two daughters, Mary Smith and husband Sidney of Topsham, and Janet Olsen and husband Toby of East Corinth: two special nephews Leslie and William Frost and a special niece Julia Carleton: six grandchildren Steven Smith and wife Deb, Scott Smith, Fred Smith and wife Kelly, Sonya Sweet and husband Jerome, Kristen Ball and Eric Olsen, and great-grandchildren, Abigail, Renwick, Natalie, Kelsey, Macey Smith, Tucker and Sawyer Sweet and McKenzie Ball as well as many nieces, nephews and their families.She was predeceased by her parents, husband, seven brothers and other family members.Helen was a kind, loving wife, mother, grandmother, great- grandmother and will always be cherished by her family and friends.Funeral services will be held Friday , May 2, 2014 at 1:00 PM in the Presbyterian Church in E. Topsham with burial following in the E. Topsham old cemetery. A reception will be held in the Vestry following the committal service.Calling hours will be held on Thursday, May 1, 2014 from 6-8 pmat the Hale Funeral Home, Upper Plain, Bradford, VT.Memorial contributions in her name may be made to the Visiting Nurse Alliance and Hospice, PO Box 976, White River Jct, VT 05001, or to Oxbow Senior Independence Program, Newbury, VT. 05051, or the Topsham U P. Church, Topsham, VT.Hale Funeral Home in Bradford, VT is in charge of arrangements.To view an online guestbook go to www.halefuneralhomes.com To plant Memorial Trees in memory of Helen Mary Frost, please click here to visit our Sympathy Store.

Topsham, Vermont -Helen Mary Frost died Friday, April 25, 2014 at her home in Topsham.She was born in Lancaster, NH on February 2, 1919, the daughter of Howard and Mary (Knoe) Brooks.At a young age she went to live with Carrie Thurston in West... View Obituary & Service Information

The family of Helen Mary Frost created this Life Tributes page to make it easy to share your memories.

Send flowers to the Frost family.