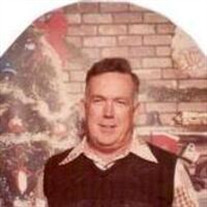 E. Corinth, VT- Henry Bailey White, 80, passed away Wednesday December 12th, 2012 at Central Vermont Medical Center in Berlin, VT. He was born at his family home in Corinth on December 19, 1931. He was the fourth child of seven born to Worthy D. and Olive (Hastings) White. He attended a one room school in South Corinth and then Bradford Academy, graduating in 1950. He served in the US Air Force from 1951 until 1954, attached to the U.S. embassy in Belgium but traveling throughout much of Europe. He then came home to help on the family farm when his father became ill. He worked a short time for Pratt and Whitney in West Hartford, CT before again returning to the farm in Vermont. He met Joyce Mary Shores and they were married on July 21, 1956. Henry became the rural mail carrier out of the East Corinth Post Office from 1958 through 1973. He then took a position as a clerk at the White River Jct. Post Office until 1975 at which time he was appointed Postmaster at the Vershire, VT office, a position he held until 1988 when he retired to spend time with his wife who had cancer. Henry was also a member of the East Corinth Fire Department where he served for a time as secretary and treasurer. He had a great interest in the family genealogy and enjoyed talking about family stories to anyone who took the time to listen. In his younger years when his wife was alive he really enjoyed attending area dances. Each spring he always looked forward to the Maple sugaring season and even as his health deteriorated he could still be found in the sugar house. He gave generously to family and charities alike. Henry was predeceased by his wife Joyce Mary (Shores) White on August 25, 1990, his parents Worthy D. and Olive (Hastings) White, and one sister Silvette (White) Gardner. He will be greatly missed by his entire family including his children, Roxann W. McLam and husband Michael of Williamstown VT, William H. White and wife Judith of Bradford VT, Anthony L. White and wife Kathy of Roxbury VT, Bradley J. White of E. Corinth VT, his grandchildren, Angela Welch, Arrin Robinson, Elisha McLam, Amanda Smith, Laura McLam, Samantha White, Janice McLam, Ashley Griffin, Joshua White, Stacy McLam, Danielle Achilles, Taylor White and their spouses and significant others and his 11 great grandchildren. As well as his brothers and sisters, Dustin White and his wife Jane, Paul White and his wife Dorothy, Jeannine Ricker and her husband Arnold, Janet White, Joan Hubbard and her husband Frank and all of his large extended family. A memorial service will be held on Sunday December 16, 2012 at 1:00pm in the East Corinth Congregational Church, with the Rev. Michael Cadwell officiating. Burial will be private and at a later time. In lieu of flowers donations can be made in Henry's memory to the E. Corinth Congregational Church Food Shelf of which Henry was a great supporter. 645 Village Road, East Corinth VT. 05040. The Hale Funeral Home of Bradford, VT is in charge of arrangements. To view an online guest book go to www.halefuneralhomes.com To plant Memorial Trees in memory of Henry Bailey White, please click here to visit our Sympathy Store.

E. Corinth, VT- Henry Bailey White, 80, passed away Wednesday December 12th, 2012 at Central Vermont Medical Center in Berlin, VT. He was born at his family home in Corinth on December 19, 1931. He was the fourth child of seven born to Worthy... View Obituary & Service Information

The family of Henry Bailey White created this Life Tributes page to make it easy to share your memories.

Send flowers to the White family.