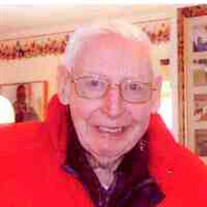 Orfordville, NH Herbert Carlos Verry passed away peacefully in his sleep, Wednesday April 20, 2016. He was 91. Herb was the second child of three born to Florence Proctor and Frank Verry in Hillsboro, NH on March 18, 1925. He was very proud of his hometown and loved to tell people about it. Graduating a year early from Hillsboro High, he completed a six-month college program at the University of New Hampshire. Eager to serve his country he went onto Michigan State College for preflight cadet training. At age 18 he joined the Army Air Force on July 16, 1943. Herb served 9 Months in the southwest Pacific and Caribbean theater as a radio operator on a B-29 Superfortress named Slim after actress, Lauren Bacall. After the war he kept in contact with his crewmembers and would travel around the country attending reunions with them. Herb was the last surviving member of his crew. He was honorably discharged in 1946 then went on to UNH and earned a degree in occupational therapy. There he met the love of his life, Laura Washburn. After a summer affiliation at Skillman, NJ Epileptic Colony, they married there in August 1948. That was the beginning of their adventuresome life, deciding to honeymoon by riding their bicycles and camping from NJ to NH. During their early marriage and with everlasting teamwork, Laura provided while Herb was able to earn his second degree in Physical Therapy at Sargent College, which is part of Boston University, and for several years worked in the Spinal Cord Unit of the University Hospital in Boston. They moved and worked at many clinical affiliations in several eastern states and met many life long friends through work and church. In 1960 they purchased the Washburn homestead located on "Washburn Hill" which has been in the family since 1864. In 1981 they moved there fulltime always keeping the place well maintained and cared for. They continued to work providing care to patient's homes well into the 1990's.Herb had many hobbies. At an early age he and his brother Frankie had a fascination for aviation and later he became a pilot himself. He loved flying, ballooning and gliding out of his favorite airport in Post Mills, VT. He was an avid photographer and enjoyed sharing his wealth of knowledge inspiring many. His wedding and nature photographs are treasured. They loved mountain climbing, canoeing, wildlife, cats and music. For many years they were proud members of the Lyme Town Band, performing throughout the twin states.He leaves behind a sister, Bernice "Bunny" Perry of Newport NH; a sister-in-law, Joyce Washburn Flint, of Newport VT; a brother-in-law, Harvey Horton Washburn and wife Geraldine Washburn of Orford, NH, and many cousins, nieces and nephews. Herb was predeceased by his parents, his beloved wife Laura, and brother Frank Verry.Memorial services will be held at the Orfordville Congregational Church Wednesday, April 27th at 1pm. Burial will follow with military honors in the family lot in the Orford Street Cemetery. A reception will follow at the Orford Street Congregational Church.The Hale Funeral Homes and Cremation Care of Bradford, VT is in charge of arrangements.To view an online guestbook go to www.halefuneralhomes.com To plant Memorial Trees in memory of Herbert Carlos Verry, please click here to visit our Sympathy Store.

Orfordville, NH Herbert Carlos Verry passed away peacefully in his sleep, Wednesday April 20, 2016. He was 91. Herb was the second child of three born to Florence Proctor and Frank Verry in Hillsboro, NH on March 18, 1925. He was very proud... View Obituary & Service Information

The family of Herbert Carlos Verry created this Life Tributes page to make it easy to share your memories.

Send flowers to the Verry family.