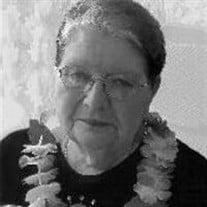 Fairlee, VT-Hester Truslow (Camp) Gardner died on January 8, 2012. Hester was born in Chicago, IL on October 13, 1927, the daughter of Edwin Tom and Katharine Sheldon Camp. She attended Miss Beard's School in Orange, NJ graduating in 1945, and then went to Northwestern University and the University of Vermont, graduating from Stanstead College in Quebec in 1949. She married Dorian E. Gardner in Newport VT the same year and lived in Allston MA, Williamstown VT and moved to Fairlee in 1951. In 2006 she move to Shelburne. She is survived by two daughters, Kathryn Kidder and her husband, Byron of Bradford VT and Valerie Gardner of Huntington VT and one son, Mark Gardner and his wife Lisa of Albany NY, five grandchildren - Aaron, Adam, and Jenny Kidder, and Stephanie and Craig Gardner, 4 great grandchildren - a brother Edwin Camp of Newport VT and a sister Katharine Baker of Orford, NH. She enjoyed her grandchildren and great grandchildren, painting, gardening, bridge and her computer. Hester had a large group of friends in each of the communities in which she lived. She leaves a number of good friends in Fairlee and at Shelburne Bay and at Hospice. She worked at Britton's, DC McLam's in Fairlee and was for some time school secretary at Orford and Lyme schools. She served as assistant town clerk in Fairlee, was a charter member and curator of the Fairlee Historical Society, and member of the planning commission. A memorial service will be held on Sunday, January 22, 2012 at 1:00 pm at the Lodge at Shelburne Bay in Shelburne, VT. Instead of flowers, please plant a flower in your garden or contribute in her memory to the Fairlee Scholarship Fund, Fairlee Historical Society, both in c/o Fairlee Town Treasurer, P.O.Box 95 Fairlee, VT 05045, or to Hospice of the Champlain Valley, c/o VNA, 1110 Prim Rd. Colchester, VT 05446. The Hale Funeral Home of Bradford, VT is in charge of arrangements. To view an online guestbook go to www.halefuneralhomes.com To plant Memorial Trees in memory of Hester camp Gardner, please click here to visit our Sympathy Store.

The family of Hester camp Gardner created this Life Tributes page to make it easy to share your memories.

Send flowers to the Gardner family.