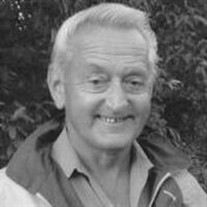 FAIRLEE, VT.-- Hollis George Huntington ,73, died after a brief illness on August 5, 2012. He was born in Corinth, VT to the late George & Wanda (Poneck) Huntington. He graduated from Bradford Academy and the Manchester Technical Institute and served in the National Guards. Hollis retired in 2001 as a General Foreman from the State of Vermont Agency of Transportation after 43 years of dedicated service. Until his illness, he was employed as a school bus driver for Butler's Bus Service and a rural route carrier for the U.S. Postal Service. Hollis was an avid "Red Sox" fan. Family and friends enjoyed many hours in his "Red Sox Room". He helped coach the Fairlee Little League to a Championship and volunteered as an umpire and referee for sporting events. Hollis was famous for his "huge" vegetable garden, sharing the bounty with many. He loved to start up the grill and was a great cook! A great dancer, he enjoyed a good "polka" and was proud of his Polish heritage. He loved his family and was a dependable, hardworking man who could rarely be idle. He is survived by his wife of thirty-four years Charlotte (Batchelder), daughter Sybil Laflamme of Hampden, Mass., stepsons Todd (Janna) and Chad (Mary) Pierson of Fairlee and six grandchildren Scott & Kurt Laflamme, Molly Pierson & Hannah Hinsley, and Matthew & Shaina Nutting, a special grandson, Jackson Blake and two great-grandchildren. He is also survived by his brother, Henry Huntington, of Wilder, VT, and two half siblings,Charles Huntington of Virginia and a sister Cynthia Huntington of Florida. He was predeceased by both parents, a sister Rose, brothers James and George, nephew Randall Huntington, and an infant son Preston. Memorial contributions may be made to the Community School Organization, PO Box 232, Fairlee, VT 05045 for the baseball/softball programs. Family and friends are invited to a Celebration of Life at his home 25 Brackett Rd., in Fairlee on Saturday, August 18th,, at 1 PM. Cemetery services in Bradford, VT are private. An online guest book is available to leave a message of condolence for the family by visiting www.halefuneralhomes.com. The Hale Funeral Home of Bradford, VT is in charge of arrangements. To plant Memorial Trees in memory of Hollis George Huntington, please click here to visit our Sympathy Store.

FAIRLEE, VT.-- Hollis George Huntington ,73, died after a brief illness on August 5, 2012. He was born in Corinth, VT to the late George & Wanda (Poneck) Huntington. He graduated from Bradford Academy and the Manchester Technical Institute and... View Obituary & Service Information

The family of Hollis George Huntington created this Life Tributes page to make it easy to share your memories.

Send flowers to the Huntington family.