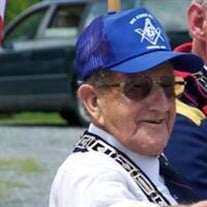 Bradford, VT- Howard W. Colby, 91, of High Street in Bradford died Saturday, January 3, 2015 at Dartmouth Hitchcock Medical center in Lebanon, NH. He was born on April 30, 1923 in Corinth, VT the son of Walter and Edith (Blake) Colby. Howard attended school in West Fairlee, VT. He was married on April 11, 1964 to Ruth Clark Colby, Mrs. Colby predeceased him on February 28, 2002. He was employed by Blake Chevrolet in Bradford, VT and retired from Dartmouth College, after retirement he worked part time for Dartmouth Hitchcock Medical Center in Lebanon, NH up until two weeks ago. He enjoyed fishing, traveling to the coast, country music and racing. He was a member of the Mt Cube Masonic Lodge #10 F&AM in Orford, NH. Howard is survived by one son, Timmie Colby of Bradford, VT., and one daughter Cynthia Shaw of Springfield, VT., three sister-in Laws, Marcia Dickson of Plant City, FL.; Verna Roberts of West Fairlee, VT and Beverly Dexter of West Fairlee, VT. Several nieces and nephews. Howard was predeceased by two brothers, Clifton and Ralph. Graveside funeral services will be held in the spring in the family lot in the Pleasant Ridge Cemetery in North Thetford, VT. There are no calling hours. The Hale Funeral Homes and Cremation Care of Bradford, VT are in charge of arrangements. To view an online guestbook go to www.halefuneralhomes.com To plant Memorial Trees in memory of Howard W. Colby, please click here to visit our Sympathy Store.

The family of Howard W. Colby created this Life Tributes page to make it easy to share your memories.

Send flowers to the Colby family.