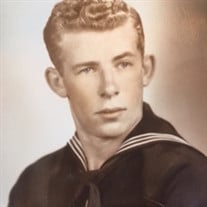 Bradford, VTHoward Sheldon Grant, age 89, of Bradford, VT passed away peacefully at his home on Thursday, June 14, 2018.He was born on April 20, 1929 in East Corinth, VT to Charles Grant and Mildred Simpson Grant.He was in the Navy from 1947 to 1952, and was stationed in Jacksonville, FL for three years and in Norfolk, VA for two years. While in the Navy, he worked on airplanes. He enjoyed telling people of his adventures while serving in the Navy.When on leave from the Navy, he met his wife to be, Vera Petelle at the Bradford bowling alley. They were married on October 26, 1952. They lived their entire married life in Bradford.His work history included driving a truck for Whitings Creamery and then Rouse Transportation. He also worked for the Vermont State Highway Department in Bradford for many years. He loved telling stories of his trucking experiences.Howard was a very friendly man. No person was a stranger. He was very athletic, and had a particular passion for playing golf. He was extremely proud of the "holes in one" that he made. When his sons were young, he coached the little league Blue Jays team. He also loved his big garden and how tall his corn would grow. He did get frustrated by the pesky wildlife that enjoyed nibbling on his vegetables.Howard was a member of Our Lady of Perpetual Help Catholic Church in Bradford. He volunteered many hours of service to the church.Howard loved his family above all else. He is survived by his wife of 65 years, Vera P. Grant. He is also survived by daughters Lynn G. Stocker of Eustis, FL (Bob), Joy G. Demers of Shelburne, VT (David), and son Charles F. Grant of Bradford, VT (Kate). He was predeceased in death by son Lewis H. Grant in 2007. Howard is also survived by 8 grandchildren, 3 great grandchildren and many nieces, nephews, and other extended family. A Mass of Christian Burial will be celebrated at 10am Saturday, August 4, at Our Lady of Perpetual Help Catholic Church, Upper Plain, Bradford, VT. There are no calling hours.In lieu of flowers, please send donations to Our Lady of Perpetual Help Catholic Church, 113 Upper Plain, Bradford, VT 05033.Arrangements are by Hale Funeral Home, 187 Upper Plain, Bradford, VT. Online guestbook at www.halefuneralhomes.com. To plant Memorial Trees in memory of Howard Sheldon Grant, please click here to visit our Sympathy Store.

Bradford, VTHoward Sheldon Grant, age 89, of Bradford, VT passed away peacefully at his home on Thursday, June 14, 2018.He was born on April 20, 1929 in East Corinth, VT to Charles Grant and Mildred Simpson Grant.He was in the Navy from 1947... View Obituary & Service Information

The family of Howard Sheldon Grant created this Life Tributes page to make it easy to share your memories.

Send flowers to the Grant family.