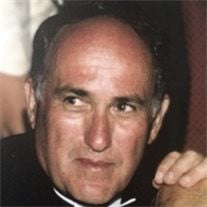 Bradford, VT- Dr. James Rogers Barton passed away peacefully with family at his side in his home in Bradford, VT on June 28th, 2016. He succumbed to cancer at the age of 79.He was born April 4, 1937 to parents Charles and Ruth Barton. In 1955 James graduated from Bradford Academy and a post graduate year at Vermont Academy in 1956. He then attended Tufts University, satisfying his undergraduate requirements in 2 years and finished Tufts School of Dental Medicine in 1962. James started his career while serving in the Army as a dentist. He returned to Bradford in 1964 and opened a private practice retiring in 2005.A gifted athlete, Dr. Barton excelled at basketball, baseball, skiing and golf in both high school and college. Golf was a lifelong passion. With Dale Montgomery as his partner, he won the 1967 Burlington Invitational and was a three time Vermont Medical Dental winner - enough to retire the trophy.Dr. Barton was active in the community. He was one of the founders of Bradford Youth Sports Association and the Pierson Industrial Park. He was a lifelong patron and member of the Bradford Golf Club, at times serving as president and board member. During the seventies, Dr. Barton was the treasurer of the Vermont State Dental Society and actively participated in the fluoridation of the Bradford water supply. In his final years, he began the development of Enhanced Living, a future assisted living project for Bradford.Dr. James Rogers Barton is survived by his wife Judy, son James and wife Lisa, daughter Beth and husband Jim, son Charles and wife Mickey and grandchildren: Kael, Alec, Hunter, Chandler, Carter, Natalie, Zo, and Avery. He is also survived by his sister Cathy and her husband Roger.A memorial service will be held at the Bradford United Church of Christ on Saturday July 9th at 3PM. There are no calling hours. Burial will be private and held at a later time. In lieu of flowers, the family asks that donations be made to the Visiting Nurse and Hospice FOR Vermont and New Hampshire, 66 Benning St Ste 6, West Lebanon, NH 03784.The Hale Funeral Homes and Cremation Care of Bradford, VT is in charge opf arrangements.To view an online guestbook go to www.halefuneralhomes.com To plant Memorial Trees in memory of Dr. James Rogers Barton, please click here to visit our Sympathy Store.

Bradford, VT- Dr. James Rogers Barton passed away peacefully with family at his side in his home in Bradford, VT on June 28th, 2016. He succumbed to cancer at the age of 79.He was born April 4, 1937 to parents Charles and Ruth Barton. In 1955... View Obituary & Service Information

The family of Dr. James Rogers Barton created this Life Tributes page to make it easy to share your memories.

Send flowers to the Barton family.